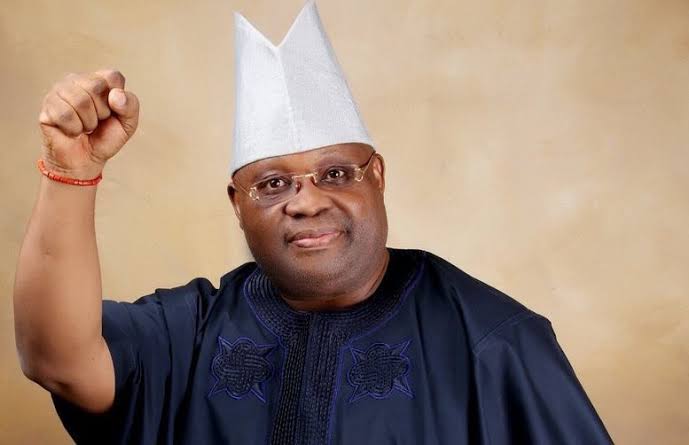 In a statement signed and released by Ayo Fadaka, Zonal Publicity Secretary Saturday March 23, revealed that the PDP south west had always known that their candidate Adeleke and Party won the last Gubernatorial election and hence the confidence that they would emerge victorious at the Tribunal if they case was diligently prosecuted.

Read the Press Statement below:

The PDP in the South West wishes to express its profound happiness at the victory of our candidate in the last Osun State gubernatorial election, Senator Ademola Adeleke at the Osun State Election Petition Tribunal.

We have always known that our candidate and Party won that election and confident that we will win at the Tribunal if our case was diligently prosecuted, therefore we give glory to God and also thank those eminent jurists who after careful examination of the evidences placed before them ruled that we actually won the election.

As a Party, we want to declare that elections conducted so far under the current leadership of INEC continues to fall very short of the expected standard of fairness and honesty required by that agency to command respect and legitimacy from Nigerians in the prosecution of its constitutional responsibilities.

INEC continues to betray partisanship in the discharge of its sacrosanct responsibilities thereby submitting itself to be a mere appendage of the Presidency which continues to arm twist and guide it to certain conclusions.

The current rounds of elections in our nation today leaves so much to be decided as INEC has invoked its guidelines curiously in States and constituencies where APC seems to be failing and use same to assist them against our Party in other places where we are thriving, this is partisan and a double standard which is least expected from the Commission.

We also note the comment of President Buhari in an address to the Council of Obas when he declared that the Osun State gubernatorial election was remote controlled for his Party to win, that comment alone confirms our assertion that INEC under its current leadership is compromised and not fit to remain in office.

The verdict of the Osun State Election Petition Tribunal is a welcome development and is a booster to the confidence Nigerians have reposed in that sector.

Though we note that the Judiciary is currently under assault through the numerous actions of the Buhari administration, the last of which is the illegal suspension of the Chief Justice of the Federation, Walter Onnoghen over what is turning out to be phantom charges, propelled by falsehood, we encourage the eminent men on our benches to continue to uphold their oaths of office and do what is proper in the interest of our dear nation.

We also want to assure Nigerians that the illegal manipulations of the Presidential elections is being challenged diligently by our candidate, Atiku Abubakar, GCON.

The Party has done its homework in this respect, having gathered evidences of malpractices across the nation, therefore we declare that we are confident of getting a fair hearing of our petition before the Presidential Election Tribunal.

The judiciary will continue to remain the last bastion of our democracy and we trust it to take required actions that will halt impunity, political dishonesty and outright thievery of electoral desires of Nigerians as expressed in the last Presidential elections.

We congratulate the judiciary for having expressed loudly that the impunity of the ruling Party, APC, which President Buhari described as “remote control” in our elections is being checkmated and this confirms that our generation owes our children and indeed future generations the responsibility to begin to take actions that will safeguard the future of our nation.

2,062 thoughts on “Adeleke, South West PDP bask in the euphoria of judicial victory!”