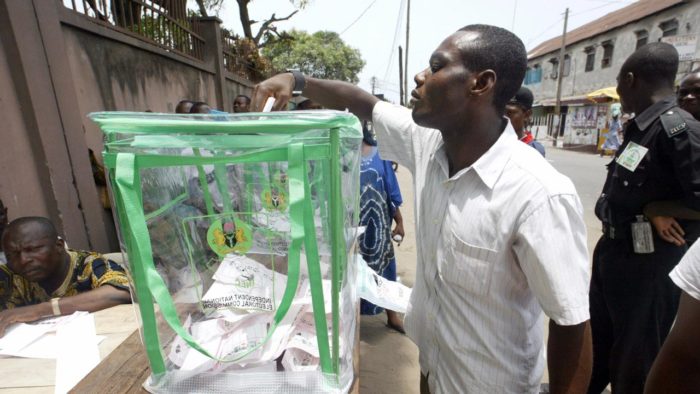 Heavy security and restriction of movement were noticed in parts of Lagos State on Saturday as residents of the state prepare for the conduct of the Governorship and the State Assembly elections.

Stern-looking army officers were seen taking their positions along several roads as early as 6 a.m to effect the restriction order.

This is unlike the February 23 Presidential and National Assembly election, which had only a few  areas blocked by the army officers and commercial vehicles drivers were seen  manoeuvring their way.

The soldiers shunned all appeal by almost all motorists to pass, as only officials of INEC and those on official duty were allowed to pass.

Some of the areas blocked include Abesan Gate, Ipaja, Mosalashi area, Alimosho, Idimu Road, Ikotun area among others.Many people were, however, seen walking while others stood in groups in the frontage of their houses, yet some on the streets ready to move the polling units exercise their civic responsibility As from 8a.m.

At polling unit 1 to 13 polling units situated at Gowon Estate in Alimosho Local Government Area, INEC officials were seen as early as 6.45a.m with their election materials.

While some INEC officials were busy moving materials and personnel out of their various Registration Area Centres (RAC) at about 7.00 a m, some were found at their various polling units.

Meanwhile, INEC Resident Electoral Commissioner in Lagos State, Mr Sam Olumekun, said that the electoral body was good to go and ready to give residents of the state free and fair elections on Saturday.

Olumekun gave the assurance while speaking on the readiness of the commission for the exercise in the state, on Friday night.

In Lagos, the electorate will go to the polls to elect a Governor and 40 members of the state House of Assembly on Saturday.

Supplementary elections will also take place in six federal constituencies in the state where the National Assembly elections held on February 23 were inconclusive.

Forty five governorship candidates across various political parties will be vying for the number one seat in the state.

Also, 640 candidates of various parties are eying the 40 seats in the Lagos State House of Assembly in the election.