Nigeria Good News: Our Focus In 2018 Is To Lift Nigerians Out Of Poverty — Osinbajo Says 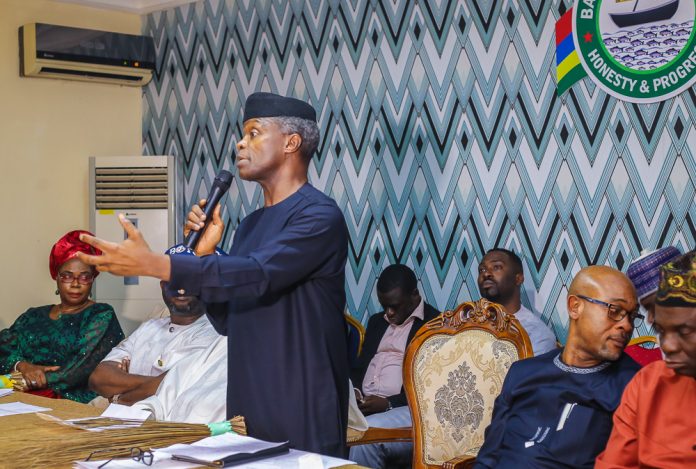 Nigeria Vice-President, Professor Yemi Osinbajo has again given the citizens some good news to look forward to in 2018.

Osinbajo has been quoted as saying that the focus of the Buhari administration in 2018 and beyond, is to take Nigerians, especially the common man, out of poverty.

He said all government’s programmes and projects were geared towards achieving that good objective.

He made the submission in a statement on Wednesday by his Senior Special Assistant on Media and Publicity, Mr. Laolu Akande, during a town hall meeting held in Bariga/Somolu Local Council Development Area, Lagos State to felicitate with Lagosians on the Eid-el-Kabir celebrations on Tuesday.

Osinbajo noted that the administration’s National Social Investment Programmes were geared towards improving the welfare of ordinary Nigerians.

He added that the government was targeting those at the lowest level so that they can do better.

“I want to emphasise that everything we are doing, our focus, first of all, is to ensure that people are taken out of poverty.

“Our country is very big; over 200 million people, many young people coming out every day. Aside from that, we also want to ensure that anybody who is doing anything at all, who is trading, artisans, mechanics; we are able to support them.

“But the majority are at a very low level, doing little things. Those are the people that we must first of all (focus on) so that the poorest are able to do better. If the poorest do better, it would be better for all of us.”

“The President’s focus has always been on the common man. So, when we came, we decided on a few things to tackle youth unemployment. First, the N-Power programme to engage as many young people who are graduates as possible.

“We started with 200,000, and just this month, we have employed another 300,000. So, in our N-Power programme, we have 500,000 young graduates who are employed in the programme. Now every local government in Nigeria has N-Power graduate.”

47 thought on “Nigeria Good News: Our Focus In 2018 Is To Lift Nigerians Out Of Poverty — Osinbajo Says”