President Buhari charges the military troops to be ruthless with bandits 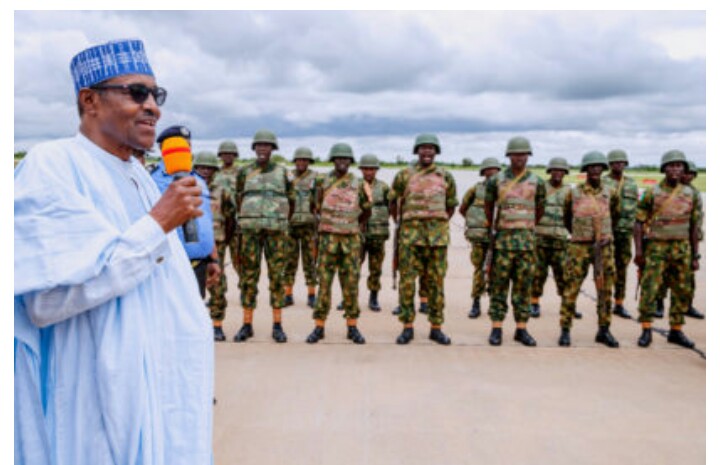 President Muhammadu Buhari has challenged military personnel deployed to Katsina State, saddled with the task of fighting bandits in Zamfara, to be ‘as ruthless as humanly possible’ in carrying out their assignment.

The president gave the challenge when he addressed the 1000-strong military force assembled to check the menace of the bandits and other criminal elements at the Umaru Musa Yar’Adua International Airport Katsina, on Saturday.

The Federal Government had, on July 29, assembled military personnel, comprising the army, air force, police and the civil defence to help in tackling the activities of the bandits.

The Nigerian Air Force (NAF) has deployed fighter aircraft to Katsina, the airport with the closest proximity to Zamfara, to allow for immediate and effective response to the menace of the bandits.

The president had also authorised the engagement by NAF, of advanced satellite surveillance technology to help in accurate detection of movement and locations of the bandits.

The bandits had been terrorising innocent rural dwellers, razing down several villages and towns across the local government areas of Zamfara, and also kidnapping for ransom. President Buhari, who expressed satisfaction with the way and manner the soldiers were carrying out their assignment, said that Nigerians deserved some peace.

‘‘Nigerians are looking up to you and us to secure the country. What is happening in the areas of operations is disgraceful.

“I’m very pleased with the way officers and men are firmly putting it down and I want you to be as ruthless as humanly possible. Nigerians deserve some peace.

“When we came into government, what we promised was security.The country has to be secured to be managed.

“Secondly, on economy, more than 60 per cent of the population of Nigeria is under 30 years. ‘‘A lot of them did not have the opportunity to be educated to secure respective jobs; their expectations are very high.

“The second undertaken we made is to improve the economy and the third is to fight corruption.

‘‘We have been doing our best and we depend a lot on you to do what is needed in the field.

“I do not want you to spare any cattle rustler, armed robber or any stupid person who thinks he is above the law.

‘‘I commend you for the job you have been doing so far and I assure you that I will continue to be a worthy Commander-in-Chief,’’ he said.

The president, who donated five bulls to the military personnel, departed for Abuja after the Sallah break in his country home, Daura. Gov. Aminu Masari of Katsina State and other government dignitaries were at the airport to wish the president safe trip back to Abuja.

While in Daura, the president had received seven APC governors, many members of the National Assembly including Sen. Shehu Sani as well as cabinet ministers, who paid him Sallah homage.