[Video] Full Statement by the Nigeria’s Senate President, Bukola Saraki at the #WorldPressConference in Abuja 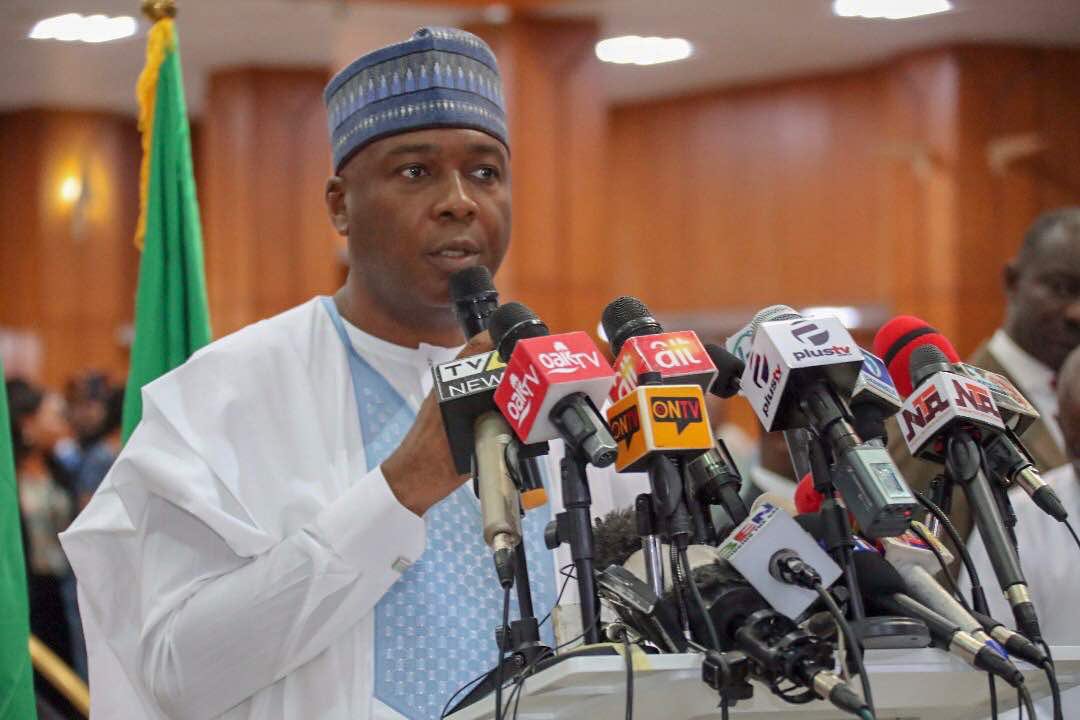 Nigeria’s Senate President, Bukola Saraki CON has held a World Press Conference  yesterday Wednesday, August 8, 2018, at the National Assembly Complex in Abuja regarding ugly defection tales and countless other unpalatable developments emanating from the National Assembly in the recent times.

Watch and Read his full statement below :

2. The ensuring standoff was a show of shame that played itself out over several hours in full view of the country. In no circumstances should this have happened. And we as a nation reaped the bitter fruits instantaneously, as evident in media images relayed around the world, images that shame us as a democratic nation. The siege was also an act of cowardice by those seeking to carry out an illegal impeachment of the leadership of the Senate in flagrant disregard of the law. People who seek control at all costs, by whatever means, never minding the injury to democratic norms.

3. I have to say that this is not about me – Abubakar Bukola Saraki as an individual. It is not about Ike Ekweremadu, nor is it about Yakubu Dogara. I am speaking for my colleagues when I say that this is about the soul of Nigeria, what we represent as a country, and our standing in the comity of nations. This is a country where so much is expected of us, so many rungs of the ladder that we are supposed to have ascended as a nation. Instead we are wallowing in impunity and illegal show of force, all of which retard our progress.

4. This is most disheartening. I don’t get any joy in saying: I said so. I don’t. However, some of you may recall that about two years ago, I stated that there was a government within this government, to a purpose that was not in the interest of what the people voted for. I said it then, and now we are beginning to see the manifestations of that government within a government. It beats one’s imagination how the head of an agency could have authorized the brazen assault on the legislature that we saw yesterday. Despite the threat to our lives, we shall continue to fight impunity and injustice in this country.

5. Happily, by the actions that Nigerians took yesterday, they demonstrated our strong resolve as a nation not to give ground to oppression. The legislature, more than any other institution in this country, more than any other arm of government, represents the will of the people. We are elected by the people, and an assault on the legislature is an assault on the people of Nigeria. The forcible shutdown of the legislature was an unconscionable assault on a national institution, and thanks to all your efforts, the aggressors have been put to shame.

6. The resistance mounted by staff of the National Assembly, my colleagues in both chambers and Civil Society Organisations (CSOs) who refused to leave the entrance of this Complex until the siege was broken, strengthens my faith in the people of this country. The rain fell, the sun rose, but Nigerians stood their ground in defence of democracy. With the strength of will demonstrated by everyone against unwarranted and unconstitutional militaristic might, the siege could not stand.

7. By this, we have shown that Nigerians can resist government within government in whatever guise, and this is humbling for me. Those who sought to attack the National Assembly under my leadership for their selfish ends have only affirmed my belief in this country. They attempted to execute an illegal impeachment of the leadership of the Senate without the backing of the law, but they faltered. I am confident that, together, we shall always defeat acts of unconstitutionality.

61 thought on “[Video] Full Statement by the Nigeria’s Senate President, Bukola Saraki at the #WorldPressConference in Abuja”