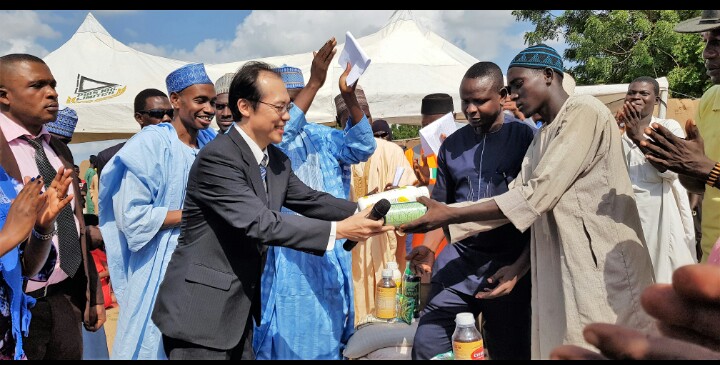 Yola, 25 July 2018 – The United Nations Development Programme (UNDP), Adamawa State Government and the Government of Japan flagged off the distribution of agricultural inputs in Loko, a village once hit by Boko Haram in Song Local Government Area in Adamawa State.

This intervention is part of ongoing efforts by UNDP to support victims of the Boko Haram insurgency in the three most affected States of Adamawa, Borno and Yobe. At the height of the insurgency which has so far claimed over 20,000 lives and caused billions of dollars in damage to property and key infrastructure, over 2 million people were displaced across the region, some into neighbouring countries. The return of peace to previously captured communities and declaration by respective States of their safety has facilitated voluntary steady return of populations to their places of origin – most of them still in need of basic infrastructure and sources of livelihoods for the families to survive.

UNDP is implementing a number of interventions in the North-East through close collaboration with State Authorities and funding support from partners including the Government of Japan. In 2018, Japan is providing USD2.5million which will facilitate implementation of initiatives to support 2,200 farmers and 500 small business. The investment will also facilitate the rehabilitation of five community infrastructures and an estimated 850 locals will be provided with emergency employment opportunities.

The agricultural inputs distribution exercise is targeted at 900 households across the North-East region who will receive seeds, sprayers, fertilizer and farming tools for use during this year’s farming season – priority will be given to female-headed households.  During the flag off ceremony, solar lanterns donated by Panasonic, a Japanese company, were also distributed.

UNDP Deputy Country Director for Operations, Betty Wabunoha, reaffirmed UNDP’s commitment to supporting rebuilding efforts and livelihoods support to stimulate early recovery and lay a solid foundation for development to take place again in the region. “Allow me to extended UNDP’s appreciation to the Government of Japan and Panasonic Corporation for the partnership and support in helping conflict affected communities in Nigeria,” Betty added.

Ambassador of Japan to Nigeria H.E. Yutaka Kikuta, stated the North-East was an economically promising region adding it is the hope of the Government of Japan to see that interventions in the region help stabilize the affected communities and that the “joint-work of Japan’s public and private initiative will bring light, a brighter future to your lives in this region”.  He reassured that the Government of Japan will continue to support Nigeria’s efforts aimed at restoring stability and livelihoods for the communities in the North East region.

Mr. Haruna Hamman Furo, Permanent Secretary of Adamawa State Emergency Management Agency extended appreciation to UNDP, the Government of Japan and Panasonic Corporation for the support. The ceremony was attended by Loko community members and representatives of Adamawa State Government.

51 thought on “UNDP and Japan flag of distribution of agricultural inputs and Solar lanterns in Song LGA, Adamawa State”