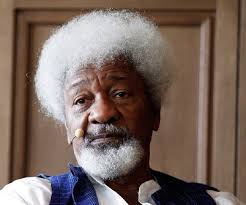 Nobel laureate, Prof. Wole Soyinka has hit out at former President Olusegun Obasanjo again, saying that he is unfit to lead a mission to rescue Nigeria and restore the nation to sanity in view of the various atrocities he committed during his reign as the number one citizen of the nation.

Soyinka, in his Interventions VIII series, titled: “Quis Custodiet Ipsos Custodes? (Who keeps Watch over the Watchmen?), Gani’s Unfinished Business,” said he had only one demand from Obasanjo, which was for him to keep away from movements struggling to restore this nation to the path of sanity and even moderate rectitude.

Soyinka’s Intervention VIII was supposed to have been launched last Tuesday at the Freedom Park on Lagos Island, but he postponed the book launch as a result of the massive herdsmen killings in Jos and the Lagos tanker explosion.

He lamented that numerous atrocities occurred during Obasanjo’s reign as president that should shut him out of the scene permanently, but noted that in the former president’s style of hypocrisy, he was trying to undertake a mission he was never qualified as even worst things happened under his nose as watchman that were ignored.

Soyinka lamented that Obasanjo presided over the reign of terror the late Lamidi Adedibu unleashed in Oyo State when he single-handedly impeached the then Governor, Rashidi Ladoja and sacked the State House of Assembly, adding that Obasanjo also supervised the sacking of Dr. Chris Ngige as Anambra State Governor through, Andy Uba.

“Presiding over his bedlam, openly, without even the slightest concern both for probity and dignity of office, is the same man who now wishes to lead a national mission. Be assured, however, that an increasing number of discerning minds who owe you nothing, not even fear, who expect nothing from you, some of whom have even written off what you owe them, have fully taken your measure.

“That I have taken the trouble to address you frontally from time to time in this piece is simply because I know that deep inside, there is a soakaway pond of personal insecurity struggling to be drained. Beneath every bully, there is scared product of insecurity and troubled conscience. Now, fight your own demons as best as you can, and feel free to flagellate Buhari with all the weapons in your armoury. I have only one demand: keep away from movements struggling to restore this nation to the path of sanity and even moderate rectitude. End this hijacking propensity. You are objectively unfitted for the role, so, get thee to a monastery,” he said.

Soyinka said even when the leadership of the PDP cut the wing of Adedibu to size, it was Obasanjo who emboldened him to be more brutal by rehabilitating him and re-provisioned his spent garrison resources, most of which had been acquired under Abacha, his personal tormentor.

“The inevitable happened. Adedibu grew increasingly and confidently brutal. It was only a matter of time before he would stage what was perhaps the first civilian coup in Nigeria’s history,” he lamented.

On power, Soyinka said “I dared Obasanjo to meet me one-on-one on any podium to present the facts of that stewardship to the Nigerian people. Just how did you, in eight years, rise to the challenge of power generation for a population of a hundred and fifty million people, endowed with enormous energy reserves-petroleum-one that even earned the nation the chairmanship of OPEC for so many years?.”

On energy, the Nobel laureate said sex-for-grades as a solution to that burdensome energy seemed to have become the practice, saying that even when Donald Trump and Bill Clinton were accused of sexual misconduct, no one ever accused Trump of using his nation’s assets for a romp on the presidential desk of the oval office and that not even Clinton who nearly lost his office through Monica Lewinsky, was ever accused of passing off any of the White House heirlooms, or influenced contracts in return for sexual favour.

“I now challenge you (Obasanjo) to search your soul, very deeply, and swear to this nation that you never awarded oil blocks in return for sexual gratification. I do not make accusations lightly and I despise snide insinuations. I believe you know me well enough. And I am no prude, I am not a hypocrite of sexual desire, nor am I interested in the seamy side of Power. Take your time, think deeply and remember that each day brings you closer and closer to your Maker and the Day of Judgment-going by your own professions,’ Soyinka stated.

Soyinka added: “Your contributions to democracy and the culture of law and order are, predictably of a remarkable and unique quality-they consist largely of the kidnapping of legislators, the sacking of Houses of Assembly, wasteful convocation of delegates for ‘constitutional amendment,’ and the subversion of whatever exists as constitution in the quest of for the elongation of personal tenure.”

The Nobel laureate also published three letters written to Obasanjo by Col. Abubakar Umar, and Orji Uzor Kalu, in which the writers came hard on Obasanjo for failing the nation in virtually every sector as well as awarding oil blocks illegally to friends and others.

In one of the letters, Soyinka quoted Umar as saying that “My President, I beseech you to return to the Lord God. It seems you have parted ways since your merciful release from prison. Today, while your flock is suffering on account of your bad leadership, you are busy attributing your misdeed to the good Lord. Those of us who are able to discern, know that you are mistaking the devil for the Lord. Sooner than later, He will fight back by disowning you. But before that happens, it is incumbent upon us as your loyal citizens to warn you to seek peace with God. May the good Lord deliver us.”

Soyinka also added that he considered himself permanently on the duty roster as long as dubious watchmen insisted on bamboozling a constituency that happened to be his, stressing that “the self-designated watchman has once again offered his service-self-conscripted-so, surely, any Nigerian who has not learnt to ask the question Quis Custodiet Ipsos Custodes? is surely no possessor of one gram of Falana’s apportionment of the so called Nigerian intelligence…it raises the legitimate question: how did you, in your turn, rise to governance challenges?”

Soyinka further added that under Obasanjo’s watch, and with proven collaboration, an elected governor was kidnapped, locked in a toilet and held there under duress to force him to sign cheques on the state treasury, saying that “he escaped confinement, thanks to a sympathetic policeman, but the state went up in flames. The state radio and television houses were torched. The House of Assembly and the law courts-my own special preserve-were vandalized. Who did you say was President at that time?”

Adapting a popular Biblical book of Ezekiel, Soyinka said “Son of man, I have volunteered to be one of those watchmen over the watchers and my credentials are fully set down in the foregoing. I have listened to the voice of Ogun who has become increasingly impatient with so much that is going wrong. He has handed me his machete and given marching orders, saying, Son of Ogun, take this machete and cut through the brambles of lies, hypocrisy, double-talk and pontifications and insincere sententiousness. Cut off the tongues of liars so that your people can know some peace.”

Soyinka said the various Obasanjo’s antics were late Chief Gani Fawehinmi’s unfinished business, saying that Gani fought the former president, including instituting a suit, along with Femi Falana, SAN on the infamous Presidential Library which was built while Obasanjo was still in power.

According to Soyinka, “invoking the same divine principle, I feel that I am recipient ancestral summons, most notably from Gani Fawehinmi who of course remains the pre-eminent watch over power right from the time of Yakubu Gowon’s dictatorship, paying the price of prolonged incarceration under IBB, I believe that he calls upon us from his present abode to take his unfinished business closer to completion, each in his or her own corner of possible involvement, competence and commitment.”