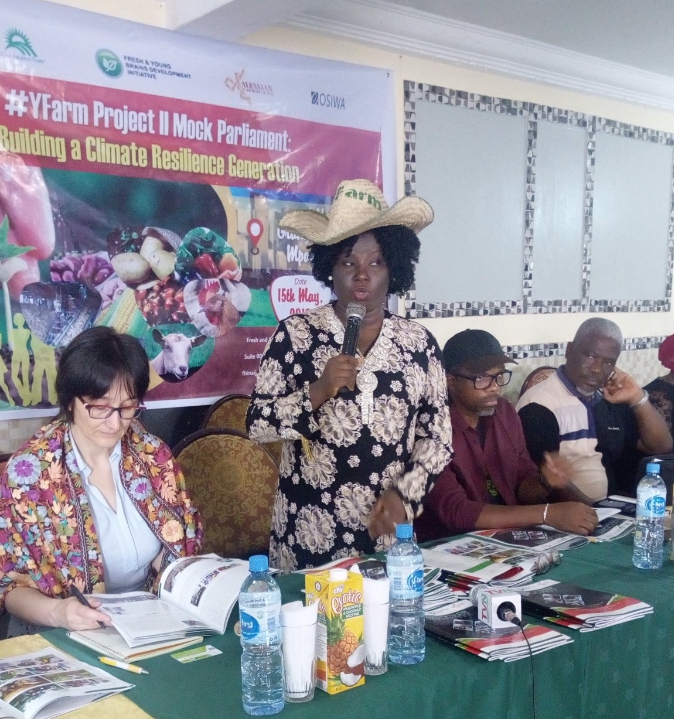 “My eyes, brain and mind are now opened to a series of countless and priceless ideas on agricbussiness and personal development” says Asogwa Chika Osita, one of the #YFarm Ambassadors who was amongst those who successfully completed #YFarm Bootcamp Project II in Imo State.

Another #YFarm Ambassador  who participated in Bootcamp in Abuja, FCT, Aisha Galadima Shuaibu said she has always loved Agriculture but didn’t have a good knowledge of how to go about it up until she was enlisted to attend the YFarm Bootcamp.

These above testimonies and shared experiences by the YFarm Ambassadors selected from eight states in Nigeria as major beneficiaries of the YFarm project II, an initiative of Fresh Brains Initiative Nigeria funded by Open Society for Initiative for West Africa (OSIWA) formed the high point at the YFarm Success Story Book Launch and Mock Parliament event in Abuja yesterday.

Speaking on #YFarm Mock Parliament and its importance, she said it was the simulation of parliamentary sitting by the YFarm Ambassadors for them to really bring out the real issues that affect them as farmers at various states particularly as regards to climate resilient agriculture in Nigeria.

Nnaemego in her keynote remarks said YFarm Project II on Building A Climate Resilience Generation was funded by OSIWA and implemented from December 2017 – May 2019 with the aim to build capacity of 80 rural and vulnerable youth from 8 States in Nigeria (Anambra, Benue, Enugu, FCT, Imo, Kaduna, Kogi and Rivers) on Climate Resilience Agriculture in order to promote youth entrepreneurship and food security.

Joseph Amenahghon, OSIWA, Programmes Coordinator who gave brilliant goodwill message at the event said it was a delight to see all the YFarm Ambassadors success stories documented for other young  and aspiring farmers to draw lessons from.

He however urged all the ambassadors never to rest on their oars and keep bringing creative and innovative ways toward sustaining and expanding their various agribusinesses from small to large scale.

“Sustainability is key thing in whatever you do with what have learnt through these high level training at your various Bootcamps and you must never allow your personal interests to override your decision for growth and expansion of your agribusinesses” he said.