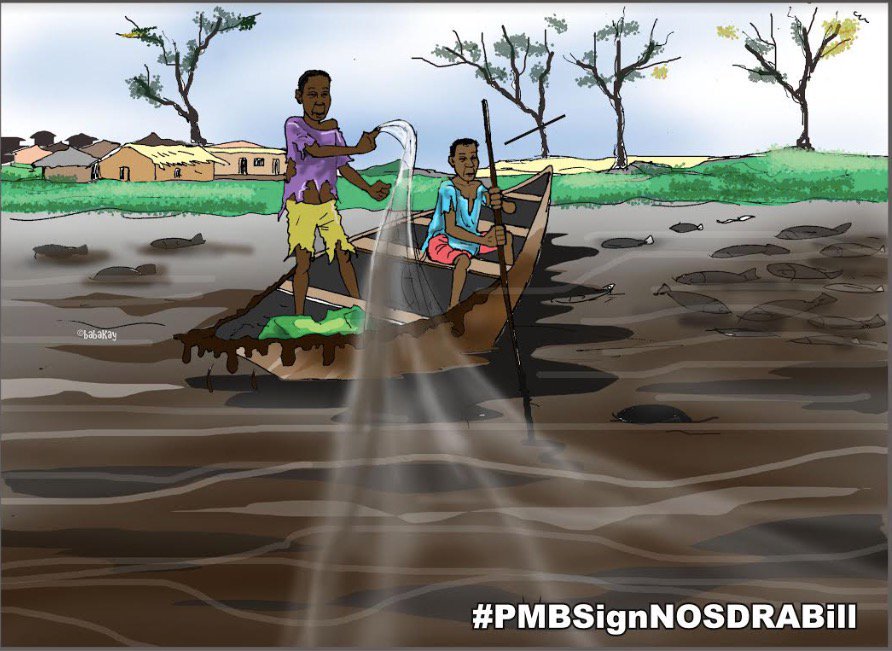 The devastating effects of oil spillage wrecking havoc and ruining the livelihoods of milions of Nigerians living in the Niger Delta region have caught the attention of many social media users particularly the Twitter users in the last couple of weeks.

This has led to heavily use and trending of hashtags such as #PMBSignNOSDRABill, #NOSDRABill amongt others calling on the Nigeria’s First Citizen, President Mohammadu Buhari to fulfill his promise of signing into law the NOSDRA Bill, which would serve as a major legal instrument that would ultimately address several lingering challenges of oil spillage, soot and other environmental pollutions due unchecked activities of oil bunkering in the region.

One of the Twitter users based in the region, in his tweets brought to fore the agony of oil poisoned water which Niger Deltans go through on daily basis.

This, according to him, has made it practically impossible for them to access potable water despite the purported clean-up staged by the Federal Government. Read below:

Another Niger Deltan who joined the conversations said oil spillage occurs virtually on daily basis in the Niger Delta region.

Stressing that several oil pipelines by different oil companies are often left to spill out crude oil content into their major source of drinking water.

Several comments on this conversation on Twitter have also revealed the danger oil spillage poses to the Children’s health particularly the toddlers and under aged ones and how it would also affect their overall well-being as the citizens of their country, Nigeria, if #NOSDRAbill is not signed into law.

#NOSBRABill had passed several readings in the Hallow Chamber of the Nigerian Senate before it was forwarded for the Presidential Assent in 2018. Since then nothing has happened.

Nigerians however, remain optimistic towards the Bill. And that President Buhari will never let his patriots down by ignoring their yearnings and demands.