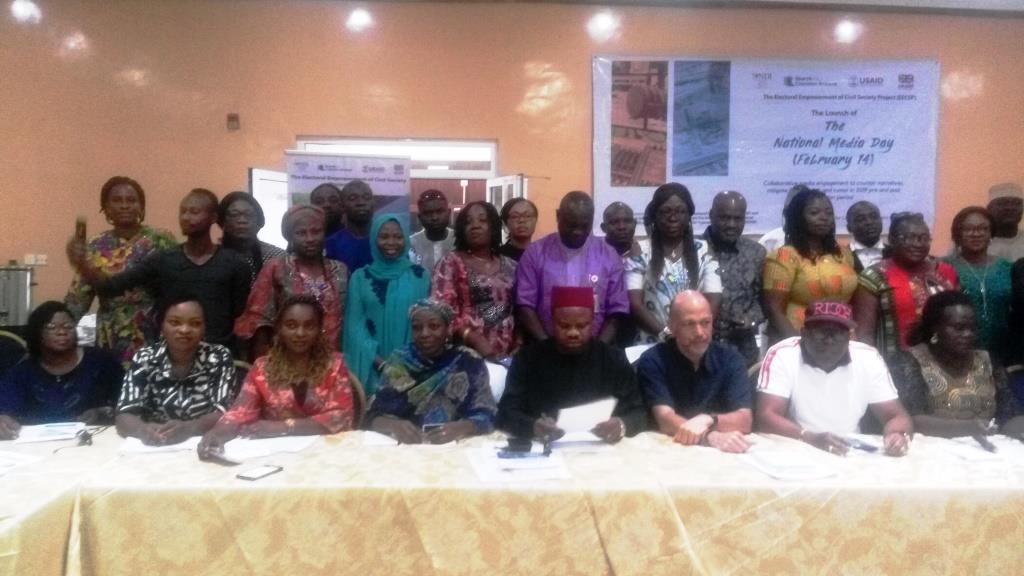 Media practitioners in Nigeria have once again expressed their renewed commitments and collaboration with relevant civil society organisations toward ensuring peace and stability at the forthcoming 2019 General Election.

This commitment was clearly spelt out at the 2-day National Consultative Meeting in Abuja with selected media organization on violence-free 2019 general elections in Nigeria organised by Search for Common Ground, an international non-profit organization that promotes peaceful resolution of conflict.

According to Alli Hakeem, one of the facilitators at the event, “this National consultative meeting has become imperative and timely at this crucial period in Nigeria to create platform for dialogue amongst the main actors in the media sector in Nigeria, considering the critical role of the media play before, during and post-election period”.

“Another crucial aim of this meeting is to provide avenue for discussion for the planning of 2019 National Media Peace day – February 14th, a day set aside for broadcasters, journalists and other media practitioners to unite in promoting peace programming as contribution to peaceful outcomes of the elections” he said.

On the role media can play to avert violent conflicts and crisis before, during and after the election, Hakeem noted that  journalists and other media practitioners must be wary of the unscrupulous politicians and their hideous scheme in a bid outsmart and outperform their oppositions in which they often take undue advantage of the media in achieving their targets.

“Nigerian politicians often appear friendly and amiable during election campaign period and device several means to buy journalists and media over to their side so as to use them as channels to churn out propaganda and fake news or outright falsehood”.

“And oftentimes, when these politicians sense defeat at polls, they seek to ways to disrupt the electoral process through multi-pronged approaches which often lead to bloody violent conflict’ said Hakeem.

Speaking on the second day at the event, Mr Aubry, Executive Director, Search for Common Ground, urged the media practitioners to improve in their verification of stories before publishing in order to curb the use of hate speech, inflammatory and inciting comments in their reportage.

He noted that journalists should be non-partisan with their reportage, and uphold moral and ethical standards of holding government accountable through their mediums rather than joining the bandwagon of politicians in causing mayhem.

“As media practitioners you must bear in mind that Government cannot fight hate speech without the use of the media, for this reason you must be wary in the use of inflammatory and inciting headlines” he remarked.

The President of Nigerian Union of Journalists, Christopher Buzor, who was also present at the event, while reading the National Media Peace Day Declaration, declared the commitment of the Union to ensure violent-free 2019 election.

He vowed that the Union would do everything within its capacity to support peace campaign and advocacy in collaboration with relevant CSOs in Nigeria.

Another high point of the event was the unveiling of the official Logo and hashtag – #THINKELECTIONTHINKPEACE for the 2019 National Media Peace Day.