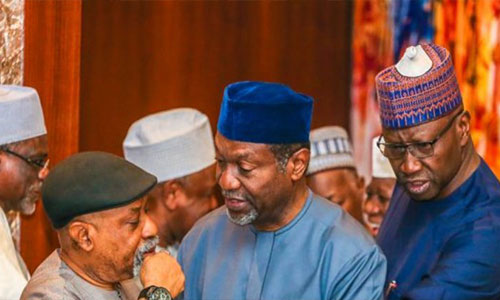 The Federal Government is to table the new national minimum wage issue before the Council of State expected to meet next week Tuesday.

The National Economic Council (NEC) met in Abuja on Thursday where it was expected to take a final decision on the submission by the National Minimum Wage Tripartite Committee which had recommended N30,000 as demanded by the organized labour.

Despite this recommendation, the federal government was yet to shift from its offer to N24,000 just as the state government maintain that they can only afford N22,500.

This has ostensibly delayed President Muhammadu Buhari’s intention to send a new minimum wage executive bill to the National Assembly for consideration and approval.

Kebbi state Governor, Atiku Bagudu, who briefed State House correspondents after the NEC meeting presided over by Vice President Yemi Osinbajo, said even though the council deliberated on the matter, he did not have the authority to discuss the outcome with the media.

However, the Minister of Labour and Employment, Chris Ngige, disclosed that the Council of State will take a decision on the matter next week.

Asked about the outcome of the NEC meeting on the minimum wage, he said: “Well there is no outcome as such. It’s a work in progress. The information Minister told you the other day after the Federal Executive Council that we are taking our deliberations to the National Economic Council and then we close up on the 22nd (of January) at the National Council of State. After that, we will be able to say where we are going.

The figure, frequency of review, those that have an exemption and everything about the bill so that people will know.

“Because by then we will be ready to transmit it to the National Assembly in consonance with our agreement with labour that we will transmit the new bill on or before the 23rd of January.”

On the insistence of state governors on N22,500, Ngige said, “well, it is not a question that the governors are saying that they cannot pay N30,000. Discussions are still ongoing and will terminate on 22nd (January) when we meet with the National Council of State.”

Asked whether the governors can be convinced to change their position, the Minister responded: “Governors are part of Nigeria and they are part of the government side. public sector.

To help the states to pay any agreed minimum wage, the federal government may push for the review of the revenue allocation formula, it was learnt on Thursday.

A source close to the NEC meeting revealed that the state governors told the council that the only way the states can pay N30,000 is for the formula to be reviewed and more money made available to states.

The source revealed that the government is looking into the demand by the states.