Diversify the economy in order to pursue development, US tells Nigeria 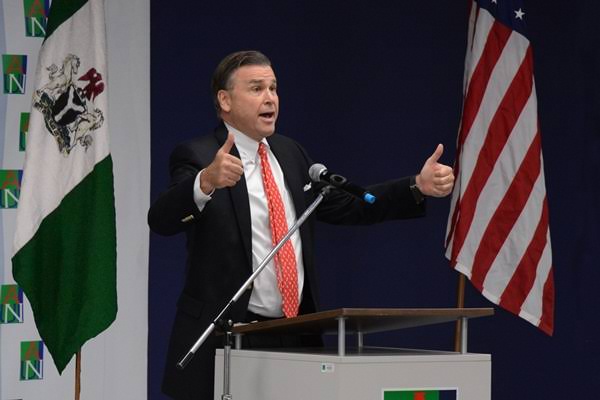 Symington made the remarks at the Nigerian-American Chamber of Commerce (NACC) Annual Dinner and Inauguration of Otunba Oluwatoyin Akomolafe as NACC’s 18th President in Lagos.

Symington, in a statement by Ebuka Ugochukwu, the Communication Manager, Nigerian-American Chamber of Commerce on Sunday said that Nigeria should reduce its dependence on crude oil.

“Let us make the Nigerian brand what God has made it which is the green and white. There is need to diversify the economy in order to pursue development and a better future.

“The entire world is getting old while Africa and Nigeria is getting younger, because they are growing six times faster over the next three years, faster than even India or China.

“The question about this growth being a blessing or a curse, is dependent on us as a country,” he said.

According to him, Nigeria has the opportunity to leverage the very best of U.S-Nigeria relationship, joined together by ties of blood, education, investment and other factors to unite it.

“We all have a secret opportunity to do well alone and to do good together.

“Nigeria is a land of the free and the home of the brave. Changing the world and making it a better place is a task left for us all to do,” the envoy said.Also, Chief Olusegun Osunkeye, a former Chairman, Nestle Foods Nigeria, said that Nigeria has to unearth the golden opportunities for economic growth and development with agriculture and ICT which were viable alternatives to crude oil export.

“Most African countries are boosting their agricultural sector in order to increase their benefits from African Growth and Opportunity Act (AGOA) and Nigeria should not be an exception.

“Lack of a supportive environment for agriculture in Africa in terms of infrastructure and high quality tools accounts for the reason why the continent’s agricultural products are not competitive.

“African Governments should invest more to support their local and agricultural industries.

“U.S also has a role to play in eliminating or reducing subsidies for American farmers and also make efforts to diversify its investments in Africa in ways that supports the continent’s agricultural sector rather than strictly focussing on the oil sector,” he said.

The Chairman of Honeywell Group, Oba Otudeko, said that the bilateral trade between Nigeria and the U.S which stands at 9.2 billion dollars in 2017 was achieved through concerted efforts from critical stakeholders who were promoting trade and investment between both countries.

Otudeko said that the low performance of non-oil Nigerian businesses in taking advantage of (AGOA) was a major source of concern.

“I am persuaded beyond any doubt your President and his team will work assiduously to ensure that Nigerian businesses, your members, are better challenged, prepared and positioned to take advantage of AGOA.

“I know Akomolafe will work to ensure that NACC remains an enabler for growth and a major private-sector organ for increased trade volumes between Nigeria and the United States of America, especially more export of made-in-Nigeria products to the US,” he said.

Also, Otunba Oluwatoyin Akomolafe, President of NACC, said that the chamber was committed to improving trade relations between Nigeria and the U.S.

Akomolafe said that the chamber would continue to build upon its connections to advance economic cooperation between Nigeria and the U.S through the promotion of business and services that improve trade relations.

63 thought on “Diversify the economy in order to pursue development, US tells Nigeria”