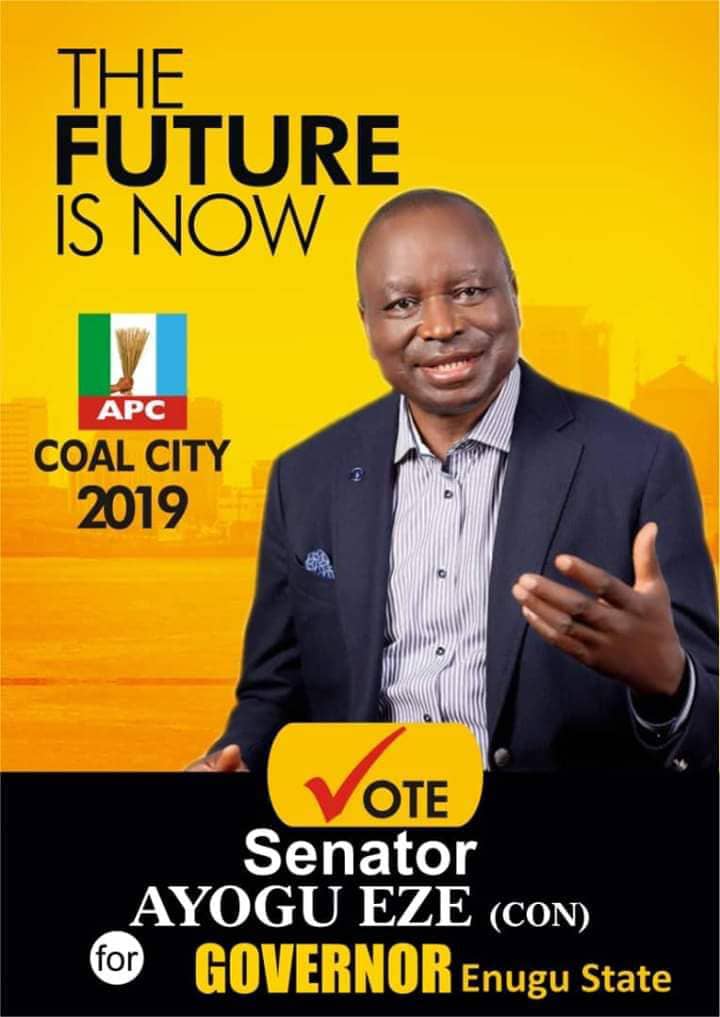 Better days are here for the people of Enugu State come 2019 gubernatorial election, as the governorship candidate of the All Progressives Congress (APC) in Enugu State, Senator Ayogu Eze has disclosed a 12-point manifesto to journalists and party members in Enugu on Saturday.

The 26-page document, bound in glossy booklet illustrated with colorful info-graphics, is titled “A New Dawn”, and contains the candidate’s personal profile, his social contract with Enugu indigenes, as well as what he is offering if elected into office.

In a speech he gave before the presentation, Eze said that his team was driven by a vision to lift Enugu people to a development pedestal that would make them independent, confident and self-reliant.

He said because of unreasonable dependence on paltry hand-outs from politicians, the people have mortgaged their conscience and also shortchanged their visions and aspirations, in exchange for pittance and temporal patronage.

“It is sad that we have a system that have made our people a laughing stock, in which everywhere you look there is a billboard singing the praise of political leaders who have achieved nothing in government,” he said.

“Through our vision, encapsulated in the document we present today, we shall make our people independent, confident and self-reliant, so that no Governor or President can intimidate them by making them abandon their dreams and enterprise in order to run to the Government House for peanuts.”

The governorship candidate told the audience that it was easy to see that the incumbent government in Enugu State had no official position on the raging national debate on the proposed N30,000 minimum wage, and promised that if voted into power next year his government would pay the proposed amount.

“The voice of Enugu State is missing in the minimum wage question that everybody is talking about. When we enter government, we will pay it. We know that we can pay the proposed minimum wage because former Governor Sullivan Chime during his recent book launch made everybody understand that in his tenure the state was making N3.5 billion every month. Now they are telling us there is no money.”

While lamenting the lack of innovative ideas in the governance style of the present administration, the APC candidate promised that his government would embark on a mission to revive the dying Nollywood industry in Enugu, where commercial film-making actually sprouted from in the early 1990’s.

“The government of Enugu has allowed Nollywood to die. We shall resurrect it. We shall develop new concepts for the industry, build and equip a film village of international standard so as to attract investments and bring back the glory of Nollywood to Enugu where it started, just like Hollywood in the United States of America.”

Eze reiterated that with the “New Dawn” vision, he was on a mission to transform the state from a visionless people to a people whose creative energies would be engaged to build new enterprises and empower their families.

“No more again shall artisans from Togo, Benin and Ghana come to take our jobs because our people lack capacity in critical artisanship. This is because we will develop Thinkers Corner and Coal Camp to bring back the glory days of our state, when Enugu boasted of expert workmen and artisans.