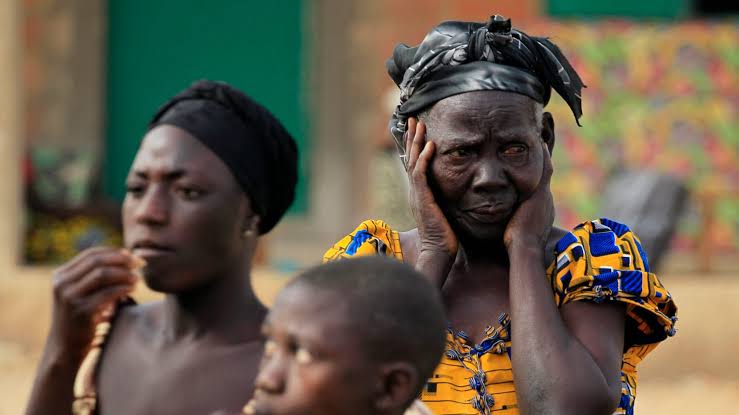 Doi is a neighbouring village to Dura Du where missing Army General Idris Alkali’s car was discovered in a minning pond penultimate week.

Husband of the women, Mr. Edward Nyam told journalists on Friday that his wife was shot dead on Thursday night around 7:35pm and alleged that the military who had visited the village shot his wife and mother of five. He added that several others were injured in the raid and have been rushed for medical emergencies.

Nyam said, “My wife had relocated with the children on Monday to Lapamde village in Doi as a result of regular harassment of the military in the community, but just yesterday at about 7:35pm she was shot dead.

”You can see the gun shot on her body and the wall of the house, we have five children, now, I am left alone with the children. We didn’t know what we did to deserve this, since the discovery of the missing General’s car in Dura Du, we here in Doi cannot sleep and we don’t know our crime.”

Village Head of Doi, Da Michael Gyang, while speaking on the incident, said the community was been humiliated by the military without any crime.

He said, “Three days ago around 3am, soldiers came to the village here in Doi, blocked all the roads linking Doi with other hamlets, stopped people from accessing their homes. They also burgled every shop here, eating our chicken and goats, and ransacked our homes.

“Our schools have been closed as result of the military activities; we don’t know what crime we’ve committed, our children no longer go to school.

“We urge the government to take away the military from our domain. Why are they killing us, what did we do? If they are really trained Military men why are they destroying people’s homes, shops and carting away our properties?”

Gyang condemned the killing of the innocent woman and the burgling of people’s shops.

When contacted on phone, the Media Officer of the Special Task Force (STF), Major Umar Adam sent a text message saying he was in a meeting and therefore could not respond.

Commander of 3 Armoured Division, Maxwell Khobe Cantonment Jos, Brigadier-General Umar Mohammed, while parading 13 suspects in connection with the Missing General earlier in the week had encouraged residents not to panic, asking those that had deserted their homes to return. “We are professional army, we have our rules of engagement and we also follow international best practices.”