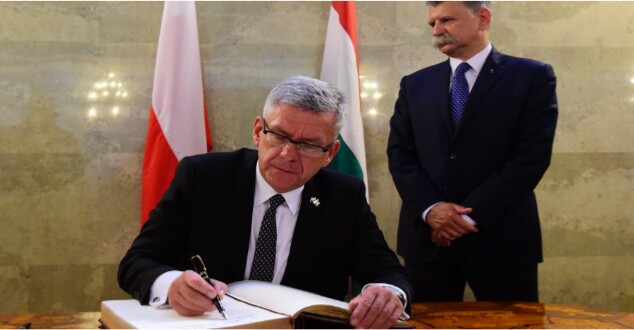 The European Union said Monday it has decided to take Poland to the bloc’s top court over the overhaul of the country’s judicial system and also ask the European Court of Justice to suspend a recent law on Supreme Court judges.

The EU’s executive Commission has been increasingly critical of Poland’s judicial reform under a right-wing government and has alleged some laws are a violation of Western democratic standards.

The body said in a statement that “the Polish law on the Supreme Court is incompatible with EU law as it undermines the principle of judicial independence.”

Poland’s law on the retirement of judges at the Supreme Court put 27 of 72 judges at risk of being forced to retire, the Commission said, with no clear criteria on who can stay.

The Commission gave Warsaw a first warning in July, when the law took effect, and followed it up with another step in August before taking Monday’s decision.

Poland’s government says it is removing judges who were linked to the former communist authorities and that the changes should benefit the justice system and ordinary Poles. It insists the structure is in line with other EU member states, but the Commission is not sharing that view.

Senate Speaker Stanislaw Karczewski said the government had expected the Commission’s move but will keep repeating its “strong, legal and essential” arguments.

“We have always respected (the EU court’s) verdicts but I am sure the complaint will be rejected,” Karczewski said.

The Commision asked the European Court of Justice to effectively suspend the retirement regime and make sure that those affected can continue in their jobs. It also wants new appointments to be halted while the court assesses the case.

Polish Foreign Minister Jacek Czaputowicz said on private TVN24 that Poland would have liked the dispute around the Supreme Court changes closed, but also suggested that it will observe the EU tribunal’s verdict.

Prime Minister Mateusz Morawiecki paid a visit last week to Judge Malgorzata Gersdorf at the Supreme Court, who is at the center of the conflict. The government says she is no longer the 1st Chairman of the court, while Gersdorf insists that, in line with the constitution, her term runs until early 2020.

Ten of the Supreme Court’s judges have retired under the new regulations, while seven others, who wanted to continue at the court, had their requests rejected by President Andrzej Duda.

128 thought on “EU takes Poland to court over judicial reform”