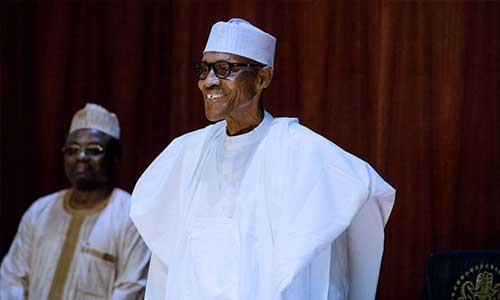 President Muhammadu Buhari has become the first to obtain the All Progressives Congress presidential nomination and expression of Interest forms. A group under the aegis of the Nigeria Consolidation Ambassador Network (NCAN) on Wednesday purchased the forms for the President.

The presidential nomination form costs N40 million while the Expression of Interest form is N5 million.

The group was received by the APC National Chairman, Comrade Adams Oshiomhole, who led other National Working Committee (NWC), members to present the forms to them.

Speaking on why the group decided to purchase the forms on behalf of the President, NCAN’s National Coordinator, Sunnsi Musa, said the President was not a multi-millionaire in terms of cash, “but he has millions of supporters who are always ready to come together to pay for his nomination form.”

According Musa, the group embarked on the project based on the recognition that the President had started laying a good foundation for a better Nigeria and there was need to consolidate on the gains made so far.

“We have no doubt that Mr. President has both in action and word being working to lay a foundation for grtater and prosperous nation that our generation and future generation will be proud of. Under his administration Nigeria has become a country sought after for investments in the world; Nigeria has assumed its leadership role in not jus Africa but the world.

“Today, Mr Chairman, Nigeria‘s moribund infrastructure is being revived. There is no state in Nigena that does not have several major Federal Government infrastructure project either completed or being executed under President Buhari.”

He said that Nigeria now had a stable and steadily growing economy that was departing from the monotonic crude oil dependence.

He said looted funds are being recovered and ploughed back to developing our country’s deficit infrastructure.

“Agriculture is now an attractive venture as farmers are becoming multi-millionaires Nigeria is now an exporter of Agricultural products as Oppose to what it was three years ago.

“Mr. Chairman, for the first time since the return of democracy Nigerians have a President who can beat his chest and state that he has never stolen from the purse of government.

“We have a President who is not having meetings at night to strike shady personal deals but rather is ensuring that every agreement entered into by Nigeria is in the interest of the country and for its generations unborn. This has indeed boost the confidence of investors hence the increase in flow of Direct Foreign Investment into the country.

“Today, and for the first time in our history, we have a government that is honest and sincere in investing in the poor, the masses and the underprivileged.”

The leader of NCAN said his group can not fold it hands while the foundation laid by the President for another person to destroy.

“We cannot afford to destroy the future of our children. The foundation laid by President Muhammadu Buhari must be reinforced.

“It is for this reason Mr. Chairman we have decided to “pull our meagre resources together and purchase the expression of interest and nomination form for President Buhari as he presents himself to our party members to be chosen as candidate for the 2019 general election,” he said.