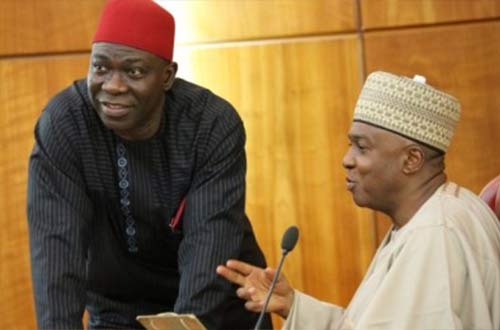 The Federal Government wants the Federal High Court in Abuja to dismiss a suit seeking an order stopping the Senate from being forced to reconvene without the authorisation of the Senate President, Dr. Bukola Saraki.

The suit being challenged by the Federal Government was instituted by two Senators, Rabiu Adebayo (Kwara South) and Isa Misau (Bauchi Central), both of who recently defected from the All Progressives Congress to the Peoples Democratic Party.

The plaintiffs had instituted the suit following the controversy surrounding the calls for the National Assembly to reconvene to consider the budget of the Independent National Electoral Commission for the 2019 elections.

But the plaintiffs and many of Saraki’s loyalists within and outside the Senate had considered the call for the reconeving of the Senate as part of the moves by the ruling All Progressives Congress to get Saraki removed as the numero uno of the upper legislative chamber.

But, in his notice of preliminary objection filed on behalf of the Federal Government, the Attorney General of the Federation and Minister of Justice, Abubakar Malami (SAN), argued that the plaintiffs lacked the locus standi to file the suit.

He asked the court to hold that the plaintiffs, though members of the Senate, were total strangers to the circumstances that gave rise to the suit.
This, he said, implied the plaintiffs lacked the locus to institute the action.

He insisted that “there were nothing showing that the Senate President has complained to the plaintiffs that his powers are being usurped by some agents of the state”.

He maintained that since every declaration and order sought by the plaintiffs in the suit were directly for the benefit of the Senate President, the plaintiffs lacked locus standi to commence the suit and that the court lacks jurisdiction to hear and determine the plaintiffs’ suit.

Malami, who is the 10th among the 12 defendants listed in the case, argued that the plaintiffs failed to link the defendants to any wrongdoing warranting the suit.

He faulted the suit which he argued was mischievously anchored on the grounds of Saraki’s re-invitation by the police regarding the bank robbery that took place in Offa, Kwara State.