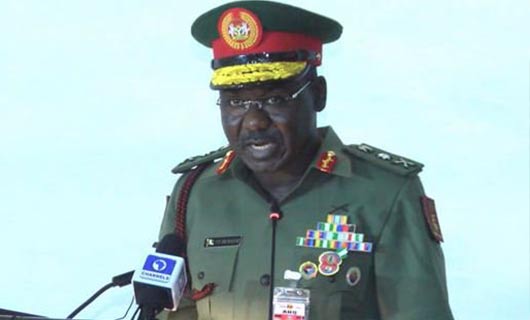 The Nigerian Army on Sunday denied alleged killing of 30 soldiers by Boko Haram at Zari village in Guzamala Local Government Area of Borno on Friday.

The News Agency of Nigeria (NAN) reports that an international wire service had reported that troops deployed in Zari in Guzamala Local Government Area were killed when Boko Haram lunched a deadly attack on the village on Thursday evening.

According to the report, scores of jihadists in trucks stormed the base at Zari village, in northern Borno State late Thursday and briefly seized it after a fierce battle in which 30 soldiers were killed.

But Brig.-Gen. Texas Chukwu, Director, Army Public Relations, who denied the report in a phone interview with NAN on Sunday.

He said that the alleged killing was the “figment of the imagination of the news agency”.

Chukwu said contrary to the claim, the insurgents did not attack any military formation but rather came to loot foodstuffs and extort money from the locals.

He said that the insurgents were repelled by the land troops of 82 Task Force deployed in Operation Lafiya Dole, who were closely supported by the Air Task Force.

“During the fire-fight, overwhelming volume of fire was unleashed on the insurgents from both the air and ground troops, neutralising several of them and their weapons.

“The Boko Haram took some of their corpses and fled while others escaped with bullet injuries, adding that normalcy and sanity was restored in the affected communities.

It is very unfortunate how people will just sit in the comfort of their zones and fabricate stories that don’t exist, most especially the international media.

“Such false narratives, we have always believe are deliberate attempts to promote Boko Haram and their activities against the sovereignty of the country.

“That media organisation was said to have gotten their information from a security personnel and went ahead to file their report without making further inquiries.

“This is unethical and unprofessional to say the least,” Chukwu added.

He said Nigerians should disregard all the propaganda stories credited to Boko Haram terrorists as troops were doing their best to ensure that terrorists were expelled from the region. (NAN)