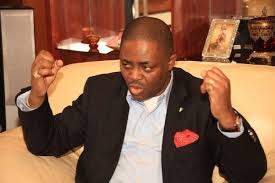 A former Minister of Aviation, Femi Fani-Kayode has cautioned the present administration against any plan to assassinate Governor of Ekiti, Ayodele Fayose.

Fani Kayode writing on his Twitter page said any attempt to assassinate Fayose would not make the All Progressives Congress, APC win the election come Saturday.

Gunshots were equally heard in Ado-Ekiti, a situation that created tension among residents of the area who scampered for safety.

He wrote “Using ur police to lay siege to Govt. House, shooting bullets in the air and attempting to assassinate @GovAyoFayose will not result in ur candidate winning the election on Saturday.

“The sordid level that Buhari has degenerated to just to win the Ekiti state election is barbaric.”