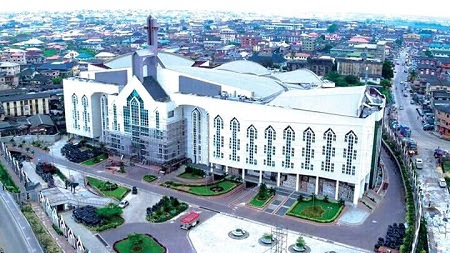 This turning point news would indeed prove wrong, several criticisms emanating from different quarters that Churches in Nigeria are out to milk their members dry and never to give back to the indigent citizens.

Deeper Life Church, one of the biggest churches in Nigeria has done what many successive administrations in Nigeria could not do since its full attainments of Democractic governance in 1999.

The church has just completed a Mega/ state-of-the-art Hospital for all Nigerians most importantly those at the lowest rung of the ladder in the society – the less privileged and the indigent Nigerians to be able to access quality healthcare services.

Read the Detail Below!

It’s a 10,000-bed capacity mega facility that can see to the needs of well over 35,000 indigent people in a single year.

It has Pediatrics, Psychiatry, General Out Patient, Burns, Oncology, and 15 other such departments, all stocked with the latest equipment necessary for such a world class facility.

The Surgery section boasts of state-of-the-art equipment that rivals Johns Hopkins hospital or any of the best health care centers anywhere in the world. It would be available to all and sundry irrespective of their financial or social statuses.

The General Overseer, Pastor Kumuyi, says it would employ thousands of Nigerian doctors and attendant health workers graduating from the nation’s many health institutions. He also hopes this would bring a halt to brain drain resulting from doctors jetting off abroad to find greener pastures, as well as billion-naira medical tourism the elite and politicians engage in monthly.

While cutting the tape to open the facility to the needy and poor in society, the vice president, Professor Osinbajo, commended the idea and quoted several verses from the Bible that showed how Jesus Christ healed the sick, fed the poor, and generally looked after the welfare of thousands of poor people around him. He is excited that at least some people are thinking in the right direction and emulating their Master, the Messiah, instead of accumulating wealth that cannot travel with them to the great beyond.

On the part of the Lagos State governor, Mr Ambode, he showered praises on the millions of individuals who contributed to build the magnificent and well-equipped hospital, hoping others would emulate them rather than gift their money to jet-acquiring pastors littering the landscape, who in turn build mega businesses for themselves and family to enjoy, yet, they teach their followers to pray to God to solve their financial needs in return.

The Gbagada-based mega hospital is reported to be free to the public irrespective of tribe, religion, or political affiliations, and is going to be maintained by further contributions from faithfuls across the country and abroad.