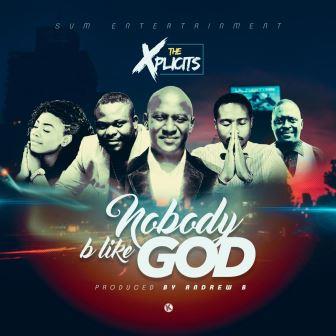 [dropcap]T[/dropcap]he Popular Abuja Gospel group XPLICITS has finally released the much talked about and long awaited single titled ‘Nobody Be Like God’’ Produced by Andrew B,  Mixed by Goldlynx and Written by Jakins Jnr of SUM Entertainment.

XPLICITS is a group of young and powerful gospel artistes with that angelic vocal ministration. ‘Nobody be Like God is performed by Mercy Peter, Jason Aison, Vola Idahosa and Jakins Jnr who also doubles as CEO of SUM Entertainment.

‘SUM ENTERTAINMENT is a music brand synonymous with excellence and humanity therefore when you are talking of churning out good music we sure do know how to make one’ said Jakins Jnr, CEO SUM Entertainment at the official release of the single.

Jakins stated that the song will be released under SUM Entertainment as Christmas and New year package for every fan and lover of God to download freely online and enjoy it.

He further shared the positive impacts SUM Entertainment seeks to achieve as a platform created to help young and upcoming artistes discover their God-given talents particularly in music, for them to be able to hone these skills and become stars.