Apr 15, 2016 Dotun Roy, implementation of SDGs in Nigeria, YOUTH AND SDGS in NIGERIA 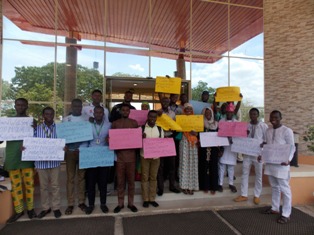 In its bid to ensure accelerated implementation of the Sustainable Development Goals (SDGs) in Nigeria, a youth led Non-Governmental Organisation, Brain Builders International has organized an advocacy programme to mark 100 days since the adoption of the SDGs by the United Nations.

The SDGs are the successor goals to the Millennium Development Goals (MDGs) and were launched and ratified by heads of governments and states during the UN High level post-2015 summit in September, 2015 in New York.

The event, which was heralded by a press conference addressed by the group’s national coordinator, Abideen Olasupo was held on Friday, 8 April at the University of Ilorin auditorium basement.

In his address, Olasupo declared that the summit was organized in order to raise the consciousness of Nigerian leaders, youths and stakeholders towards accelerated conceptualization, domestication, implementation, monitoring and evaluation of SDGs, a 17-point agenda.

Olasupo asserted that his organisation strongly welcomes the final draft of the post-2015 outcome document as it, “brings a robust level of ambition and a clear commitment towards universality and integration, as well as positive steps towards inclusion and participation.”

He emphasized that ignorance coupled with negligence on the part of Nigerian government and citizens has been held accountable for the failure in achieving the MDGs.

The Brain Builder International Coordinator recommended that the Nigerian government should establish cross ministerial commissions that will see to the implementation and monitoring of the post-2015 agenda.

Other recommendations made by Olasupo include the creation of SDGs multiparty parliamentary committees, translation of SDGs into national development plans, explicit provisions for social protection and service provision by the nationalized successor SDGs, among others.

He also called on the media to speak about any deviation from governments’ commitment to all the SDGs.

Also speaking at the programme, Mr Olalekan Obisesan, a young public speaker and a farmer shed more light on the SDGs and how the youths can contribute their own quota.

He emphasized on goals 11 (sustainable cities and communities)   and 16 (peace, justice and strong institutions) enlightened that the future of this country lies strongly with the youth and said further that in order to actualize these goals, there is need to have it in plan, make it an habit, inspire to do it, invite for it and support doing it. He ended with a quote of mother Theresa who said, “I cannot change the world but I can cast a stone in water to generate many ripples.”

The Special Assistant on Media and Communications to HON. Abdulrazaq Atunwa, Mr Olawale Rotimi was also one of the facilitators at the summit. He discussed goals 1(No Poverty), 2(Zero Hunger) and 8 (Decent work and economic) affirming that more than half of the Nigerian populace live below 120 naira per day. He added that goals 2 and 8 are the major contributing factors to poverty.

Thus, in order to actualize SDGs by ending poverty, the youth has been charged to aim towards becoming young entrepreneurs and shun corruption as this is not only displayed by political office holders as widely believed.

Dr.(Mrs.) Saudat AbdulBaqi, the Head of Mass communication Department, University Of Ilorin, who spoke on Goals 5 and 10 bordering on gender equality and reduced inequality, called for the need to see everybody as human and suitable in any capacity despite being of any gender.

She further condemned the rate at which females see themselves as being inferior to their male counterparts, especially in leadership matters despite their intelligence.

The summit ended with an interactive session where various participants expressed their divergent views ranging from non- readiness of Nigeria for the SDGs to the male gender being at the receiving end in a bid to serve females better.