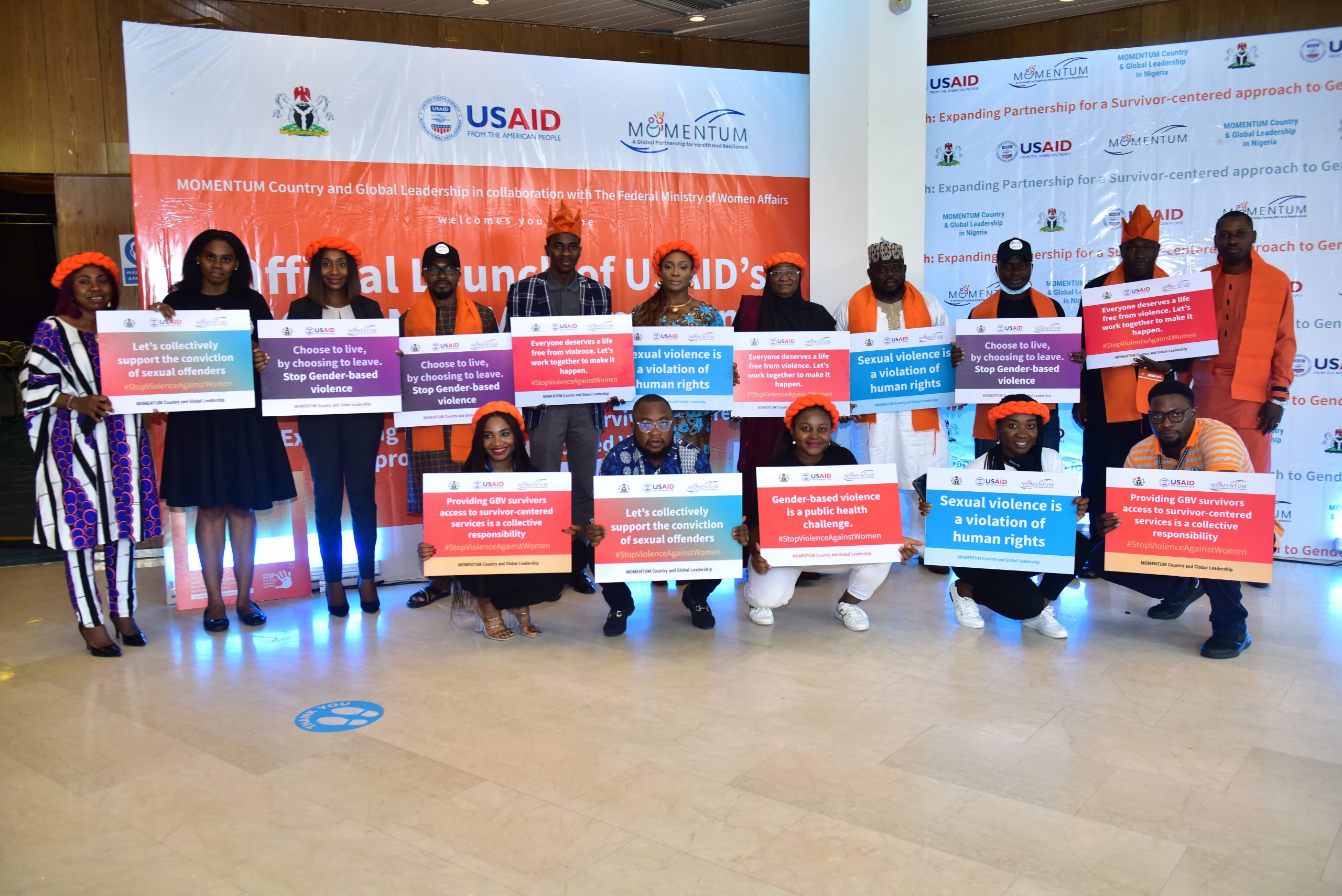 Federal Ministry of Women Affairs in collaboration with United States Agency for International Development (USAID) has launched USAID Momentum Country and Global Leadership Project to turn the tide of Gender Based Violence (GBV) in Nigeria, yesterday in Abuja.

The project, according to USAID envoy, U.S. Charge d’ Affaires, Kathleen FitzGibbon, is aimed at expanding partnership for a survivor-centered approach to GBV response in Nigeria.

“it is envisioned to enhance cross-sectoral collaboration and innovative partnerships among state and non-state GBV actors in the country”.

“Already two states have been selected for the pilot implementation of this laudable project in Nigeria namely: Ebonyi and Sokoto respectively. These two states, have been selected based on  recurring reports/cases of GBV gathered through documented survey over the years.” she said.

Adetiloye Oniyire, Country Director, Jhpiego -an organization that has been in the forefront and collaborating with USAID on Gender related issues in Nigeria for decades, in his remarks at the launch expressed utmost optimism towards the smooth implementation of these projects aiming at ending GBV in Nigeria and its positive impacts on the nation.

Speaking about the good works of Jhpiego since it came in the country in 1974, he said Jhpiego is an international, non-profit health organization affiliated with The Johns Hopkins University, Baltimore, USA.

“For more than 45 years and in over 155 countries, Jhpiego has worked to prevent the needless deaths of women and their families.

“We use innovative approaches, put research into practice and develop creative solutions to improve health care services, and strengthen the capacity of countries like Nigeria to Saving Lives; Improving Health and Transforming Futures of women and their families.” He said.

Nigeria’s Vice President, Yemi Osinbajo ably represented by the Honorable Minister of Humanitarian Affairs, Sadiya Umar Farouq in his remarks he said: “As a Nation, we will continue to boldly condemn Gender-Based Violence (GBV), so long as it continues to impact negatively on survivors, victims, families, broader society and economies of Nations.

“We are more than ever convinced that Gender Based Violence is driven by structural inequalities and unequal power relations that render women subordinate to men, due to limited access to education, employment, finances, healthcare amongst others”

Osinbajo further added that as a part of the move to end this meance, Mr. President has directed the Inspector-General of Police to deal with all perpetrators in furtherance of the declaration of Zero tolerance to Rape and other Gender-Based Violence, as well as constant engagement with the Police on the need to promptly address issues of Gender Based Violence. Inter-Ministerial.

Honorable Minister of Women Affairs, Dame Pauline Tallen in her speech stated that the devastating consequences of Gender-Based Violence (GBV) are felt at social, economic and personal levels because of the grievous harm inflicted on victims.

“It is important to note that Gender-Based Violence is not just a human rights issue, but also a moral overbearing effect, and failure to invest in stopping it leads to substantial social and economic losses which is estimated at 2 – 8% of the Gross Domestic Product (GDP).”

Tallen added that GBV reflects the extent to which women and girls’ rights are threatened and violated resulting in their inability to enjoy personal and political autonomy and unable to contribute to decisions affecting their lives amongst many other issues.

Roseline Iniobong Okon, a survivor of gender based violence who was privileged to share her heart-rending story in the hands of her estranged husband at the launch said GBV took toll on her mental health for several years even after she had left the marriage, the scars of agonies, torture and depravation she suffered could still be visibly seen in her life.

“My ex husband subjected me to forceful sexual encounter (rape) with him before he could give me and my little child a thousand Naira for daily meal, while I was still married to him. Such terrible encounter led to the premature birth of my second child, whom later died.

“I was verbally and physically assaulted like a slave in my own home. And when I could longer bear the pain, I began to plan my exit. He soon found out my plans and he doubled the beating and torture. I almost lost my life but held on to life because of my only daughter’.

More photos at the launch