SARS Panel Hands Over recovered Vehicle to the owner! 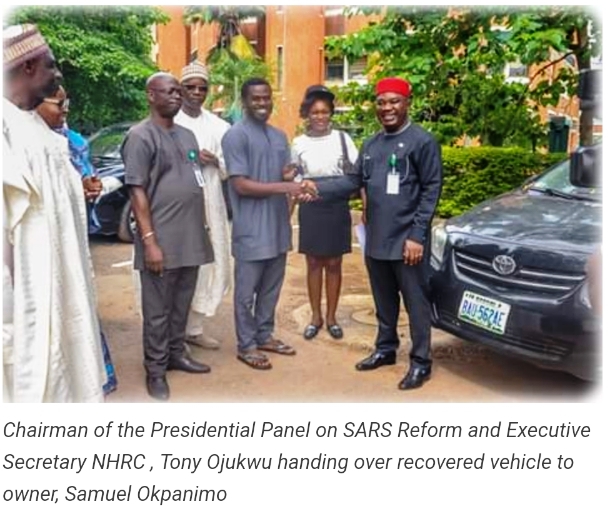 A Toyota vehicle recovered during SARS Reform sitting in Abuja has been handed back to the owner, Mr. Samuel Okpanimo, by the Presidential Panel on SARS Reform today.

Mr Okpanimo’s vehicle was arbitrarily taken from him by SARS and had lost hope of recovering it when suddenly the Panel after hearing on his case ordered that the vehicle be returned.

Delivering the vehicle to Mr and Mrs Akpanimo at the premises of the the National Human Rights commission (NHRC) Headquarters, Abuja, Chairman of the Presidential Panel on SARS Reform and Executive Secretary NHRC, Tony Ojukwu Esq stated that Mr Akpanimo’s vehicle was one in the many recoveries made by the Panel and which had been given back to their rightful owners.

He reiterated the NHRC resolve not to spare human rights violators.

Mr Akpanimo expressed gratitude to the Panel for recovering his vehicle which according to him had already been auctioned by the SARS.

24 thoughts on “SARS Panel Hands Over recovered Vehicle to the owner!”