Evils of Migration and ailing public policies in African States 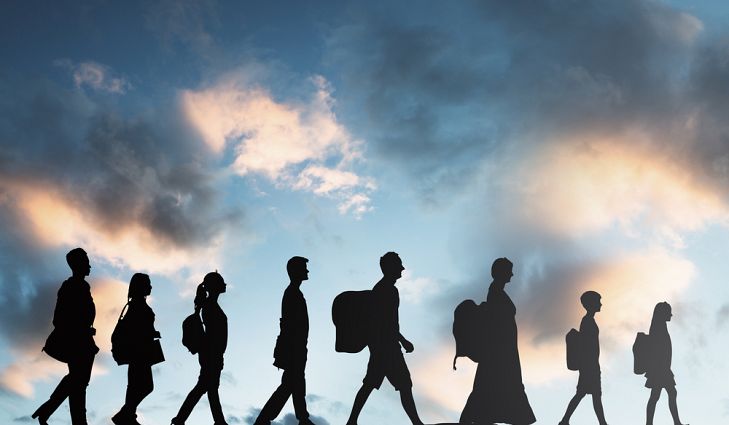 Migration never seemed to be a big issue in Africa until videos of grisly and dicey scenes of young Africans risking it all on the Mediterranean sea went viral on social media in early 2018.

They were parked together in a tiny boat, in a bid to illegally cross into Italy and Spain – two of the poorest countries in Europe, according to recent Human Development Index report.

From the scenes, it was evident that those young Africans were not coerced into absconding their home countries for another country when the chances of surviving the deadly voyage could be slim and possibility of being repatriated back to their countries of origin was very high, even after they had scaled through the deadly voyage.

They remained unperturbed by any opposition or obstacle – ignoring the impending danger of crossing high sea in search of better lives elsewhere. That’s the level of desperation at which some young Africans would exhibit towards relocation to any supposed developed countries particularly in Europe or North America for a better life.

According to several reports on migration, in 2007 BBC reported that the International Organization for Migration estimated around 4.6 million African migrants lived in Europe.

Fast forward to 2018, it had been reported by Migration Policy Institute estimated that between 7 and 8 million irregular migrants from Africa now live in the EU. There had been an upsurge in the figure, increasing to about 4 million African migrants in 10 years. What a shocking exodus!

Now the question most sub-Saharan African states must provide answers to is what would make these young and productive Africans exiting their continent for better life elsewhere?

Although several reasons have been adduced to why an average African would embark on an illegal migration mission to any developed country, some of which could be unemployment, skills acquisition reason, education, famine amongst others.

However, in the recent times, it has been revealed that failing and ailing public policies and lack of political will by most decision-making bodies in African States to institutionalize actionable legal frameworks in addressing several internal economic challenges such as corruption, misappropriation of public funds, money laundering, embezzlement, favouritism, nepotism, lack of clear plan to empower the youths and political instability amongst others have been the major harbinger for this sudden exodus to Europe and other foreign lands particularly by the youths who are considered the most productive demography on the continent.

This inability to productively implement relevant public policies that would create employment opportunities for the teeming graduates has even culminated into several threats in intra-Africa migration on the continent.

Using Nigerian as a typical case study, Nigerians are well known industrious Africans anywhere you can find them in the World, unfortunately, this is gradually working against them as the citizens of the host countries where they have gone to sojourn are beginning to perceive them as major threat to their meal ticket. They now see them as leeches who had come to scramble for the jobs meant for them and snatch their socio-economic means away from them.

The recent massive repatriation in Ghana was a pointer to this fact. On 19th February 2019, Ghanaian Government forcefully repatriated more than 723 Nigerians living in Ghana, which supposed to be the sister West African state to Nigeria.

The similar incidents was the Xenophobic attacks that was unleashed on not only the Nigerians but other African migrants in South Africa in 2010 and 2015 respectively.

Come to think of it, if African migrants, who probably had legally migrated within their continent could suffer such attacks in hands of other Africans like them, how much more attacks, prejudice and racial discrimination do we think these illegal migrants would have suffered in other continents where they had hoped for better a life?

Here is the answer below…..

This above photograph speaks volumes of the dehumanization African migrants suffers in other continents they had illegally migrated to. It is actually the worst condition any human can live, in any of the supposed developed countries.

The migrants in this above condition would definitely lack access to virtually all basic needs of life be it healthcare services, clean water and sanitation, good employment and even education.

For whatever reason, no human should be subjected to such despicable condition. As a matter of fact, several victims of wars and conflicts live better than this in some volatile and war torn regions of the world.

Usually migrants in this situation are stuck between the devil and the deep blue sea. The reason is simple. It is because large numbers of the migrants in this condition invaded the said country illegally with no passport, visa or other form of identification. Therefore, they remain in this dilemma for years struggling and engaging in illicit ways of survival either by doing menial jobs, protitution and other demeaning ways of survival, while the possibility of returning to their home countries remains so bleak.

The reality is, despite the unpalatable experiences other illegal migrants share in the news everyday, thousands of migrants are still trooping out of their countries of origin in search of supposed golden fleece or greener pastures or whatever they may call it everyday globally.

Do not misconstrue this, it is neither a sin nor crime to migrate from your home country to any country of your choice for a better life or professional development as long as it is done legally to guarantee yourself an improved livelihood, As a matter of fact, it is part of our basic human rights. However it would only amount to a greater level of absurdity if any migrant is found in such a demeaning condition even after he or she had legally gained entrance into the country.

Now the question is, how do we convince thousands of other prospective migrants who still hope and dream of leaving their countries to a place where they are not guaranteed a better life than their countries of origin??

Another question is, what are the African States doing in curbing illegal migration to these other countries rather than create better opportunities so as to harness the vast human resources for the development of the continent?

These above questions do not only call for a sober reflection, it is also a call to action particularly for the fact that countless of illegal migrants from Africa are becoming victims of untold dehumanization and 21st century slavery in other hostile countries they had hoped for a better life.

At this juncture, in providing sustainable answers to these questions, everyone has a role to play – the media, the policy and decision makers and the civil society must collectively deconstruct that mentality or ideology by any citizen who still hopes to abscond illegally to other continent to constitute nuisance all in the name of searching for greener pastures.

The role of media practitioners (Tradition and new media) in this?

Media practitioners are not just the watch dog of the society, they are equally opinion moulders. The advent of new technologies in information dissemination has made communication easier, the use of several social media platforms to stimulate conversations on why young Africans must desist from illegal migration would go along way in dissuading thousands of young Africans who still nurse such ambitions.

Media practitioners and filmmakers could leverage on the use of documentary and short films to capture the anguish and pains of these illegal migrants while embarking on deadly mission to be screened for public enlightenment on the dangers inherent in illegal migration to other continents.

Civil society also have a major role play by collaborating with the media in sensitisation and advocating for improved policies that would create better opportunities and future for these productive African demography.

Policymakers which comprise the parliaments, legislatures, and political office holders have the lead role in institutionalising legal frameworks and improved public policies in addressing hydraheaded monster called corruption which has been the major bane in most African States causing major socioeconomic setbacks.