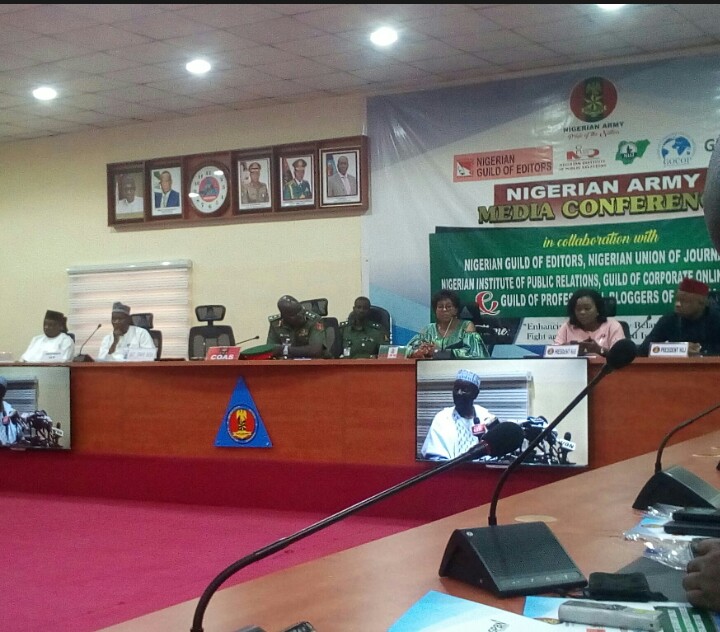 Nigeria Army is currently working to further strengthen the working relationship between its personnel and the Media in order to effectively combat all forms of insurgency and terrorism in the country thereby enhancing Nigeria’s national security.

This development was made known at a 2 day Media Conference organised by the Nigerian Army bringing together prominent media organisations and platforms and practitioners as well as other major stakeholders in media sector such as Nigerian Union of Journalists, Nigerian Guild of Editors, Guild of Professional Bloggers of Nigeria amongst others under one roof for cross fertilization of ideas and deliberations on the best ways to synergise in the fight against insurgency and terrorism in the country.

Speaking at the Conference, Chief of Army Staff, Tukur Buratai said there is no doubt, by the distinct position of the media, it can stabilise and of course destabilize situation in any given security environment.

The Army Chief addmitted in his speech, that the pen is indeed mightier than the sword given to the strategic roles media plays in any sane society.

“This media conference organised by Nigerian Army happens at the right time when we are faced with the challenges of reporting Military Operations vis-a-viz concerned reserved of our national security.

Efforts of the Military to ensure peace and security in our nation is a constitutional responsibility of all which requires maximum support from all sectors to make Nigeria safe for all.” he remarked.

Buratai further stated that the role of media is key in maintaining national security by shaping the public opinion by reporting what is right as at when due so as not put the lives of the Citizens in danger.

Veteran Broadcaster and Former Director General, Nigerian Television Authority, Chief Tony Iredia, who delivered a brilliant paper at the conference commended the efforts of the Nigerian Army for their bravery and courage in safeguarding our national security over the years particularly in their relentless efforts to end Boko Haram insurgency in the country.

Iredia however, charged the Nigeria Army to remain factual in their dissemination of information so as not to cause misinformation in the media which may also culminate into lack of trust in their discharge of duties.

“I would also like to urge the Nigeria Army to be actual and consistent with the information in order to prevent cases of contradictory reportage in the media” he said.

The media conference took place between 23rd and 26th, January 2019 in Abuja.

3,519 thoughts on “Nigerian Army seeks ways to strengthen relationship with the Media in combating insurgency”