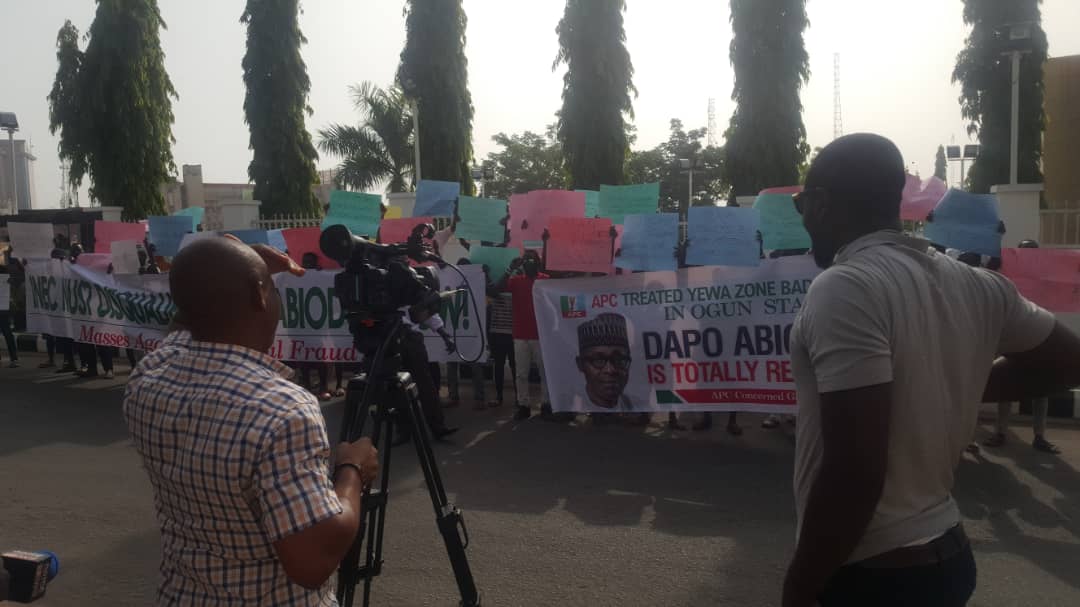 The groups operating under the coalition name of Masses Against Electoral Fraud that took their protests to the INEC headquarters and the APC national secretariat in Abuja yesterday have resumed their protests this Friday morning.

As early as 9am Friday, the protesters gathered at the Three Arms Zone in the FCT chanting solidarity songs and calling for the disqualification of the APC governorship candidate for Ogun State citing several irregularities in his emergence and several allegations bothering on perjury against him.

The protesters were however prevented by security agencies from accessing the National Assembly which had been their target destination.

Displaying placards that read, among others, “Dapo Abiodun Should Be In Police Custody Now”, “DSS Must Investigate Dapo Abiodun Now! “, “Arrest Dapo Abiodun Now! “, “Tinubu and Oshiomohle Are Threats To Democracy “, the protesters later dispersed and seen being driven in a convoy of about five Coaster Buses towards the Central Area still singing and displaying their placards.

Speaking on the protest, the Convener of Yewa Collective Action Movement , Comrade Mark Adebayo who had earlier organised a Press Conference on the same issue in the Ogun State capital, Abeokuta, on Monday said “We will stop Dapo Abiodun at all costs and redress the political injustice and insult meted out to Yewaland by the forces of retrogression and wolfish politicians. The APC will be flogged into political coma in the coming governorship election in Ogun State. We can no longer tolerate such blatant insolence against our people”.

The protesters vowed to resume their protests after the Xmas break.