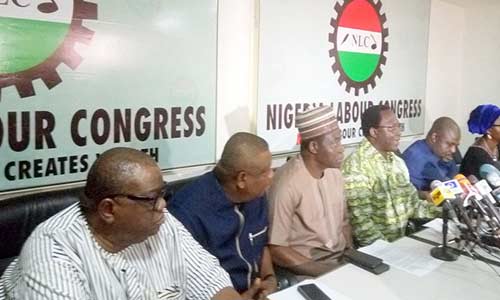 The Nigeria Labour Congress, the Trade Union Congress and the United Labour Congress have threatened to go on strike on November 6 if the Federal Government fails to take the plight of Nigerian workers more seriously.

Specifically, the labour unions said if the upward review of the national minimum wage was not acceded to by the governors and the Federal Government, they would have no other option but to go on strike.

In a statement jointly signed by the NLC President, Ayuba Wabba; the TUC President, Bobboi Kaigama; and ULC President Joe Ajaero, the unions lambasted the Federal Government for its decision to implement a ‘no work, no pay’ policy.

The statement read in part, “If nothing is responsibly done by the Federal Government to meet our demands, on Monday, November 6, we shall embark on a nationwide strike to compel this government to show more sensitivity to the plight of Nigerians and the suffering that is decimating our people on daily basis.”

The organised labour said that the Federal Government should rather implement a ‘no pay, no work’ policy as well as a policy that would criminalise the non-payment of salaries.

The statement added, “A nation where the governments owes its workforce several months in arrears of unpaid salaries has not sought ways to eliminate it but is rather seeking ways to gag same workers from protesting this crime against them and their families.

“Of course, it has not! They are only interested in ‘no work, no pay’ seeking ways to constantly gag and put workers in a strait jacket has always been their pastime.”

The unions said it was unfortunate that governors could kick against the N30, 000 minimum wage but still solicit votes from workers.

They asked workers to vote out those who had failed to protect their interests.

The statement added, “Nigerians are no longer surprised why governance in the nation seems to have become a huge joke if this is how they tackle other serious national issues. Imagine governors’ forum that has six representatives in the tripartite committee jumping in to make excuses after its representatives had made their submissions in the committee!

“We shall consider any governor saying that he is unable to pay as unpatriotic and, an enemy of Nigerian workers and masses. We shall vote them out in 2019.”

The organised labour said since the government was not willing to demonstrate honour and integrity in relating with Nigerian workers and masses, a national day of outrage and mourning would hold on October 30, 2018.

After which a meeting of various organs of the unions would also hold and then jointly embark on a strike.

54 thought on “NLC, TUC threaten to commence strike on Nov 6”