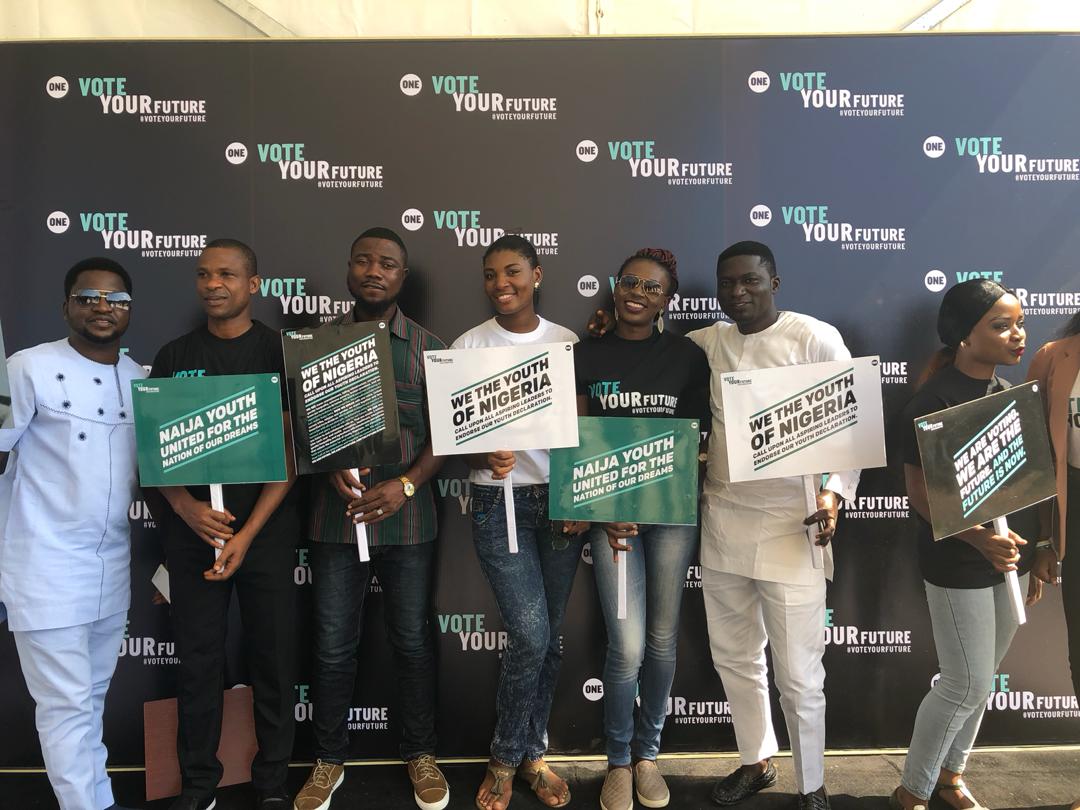 ONE, an international development Organisation working to end poverty in most developing countries of the world including Nigeria has launched a campaign tagged #VoteYourFuture in Abuja today Saturday 20th October.

The event which had huge turnout young Nigerians – more than 4,000 Nigerians in attendance alongside other well-known celebrities within the entertainment industry such as Bisola, Banky W, FalztheBadhguy, Ebuka, who was doubled as the Host amongst others was put together as a platform to engage the political aspirants – party candidates for the next Presidential Election come 2019 in a public discourse.

According To Serah Makka, Country Director, ONE, while giving her keynote address “This is the exciting start of a non-partisan, people-powered movement to ensure young Nigerians have a voice in the presidential election.

“As a non-partisan organisation, ONE had sent an invitation to presidential candidates to attend the #VoteYourFuture event even though we could not guarantee that their attendance. However, this launch event is the first step of many and together we’ll take every opportunity to make our collective voices heard”. she said.

Presidential Candidate Of National Interest Party Eunice Atuejide who spoke at the Youth Summit said she will be delivering on all she promised in her manifesto if elected as president.

“We all copy and paste. We listen to you and rewrite our manifesto. We should learn to deliver what we promise or promise what we can deliver” she added.

“If I’m voted in as president, you have a Nigerian who understands you and what you go through. I came here early out of respect for you all”, he affirmed.

Celebrities such as Falzdbadhguy and Leila, Banky W and Bisola were also the Panelists at the event. They were able to voice their views about the current political economy of the country and what 2019 General election portends for all Nigerians.

Speaking at the Summit, Falz stated that Nigerians youth must not sell their future for pecuniary gains or gratifications and vote rightly for the right candidates.

Banky W added that ‘It is time for the right kind of candidates to emerge from our political parties. For us to really influence politics and governance in this country, we must take a step further. We need to get involved!’

On the issues of electoral malpractices and rigging activities during the elections  he said Nigerians must make use of Hotlines provided by the INEC to expose any suspected polling unit.

“There are hotlines used by INEC, get footages, get evidence from any polling unit you suspect malpractice. If it’s confirmed, INEC can take action and if they don’t, we can now hold them responsible” he remarked.

88 thought on “ONE Launches #VoteYourFuture campaign to engage political aspirants!”