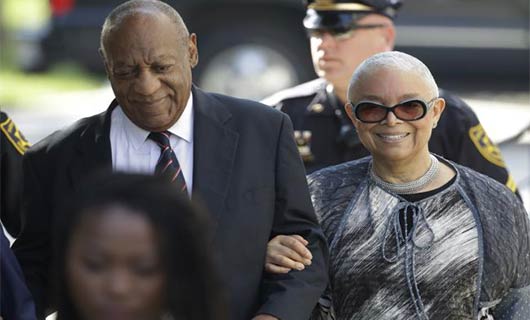 Cosby’s bid to avoid a defamation lawsuit brought by a well-known former model who said the comedian sought to destroy her reputation after she publicly accused him of rape.

The justices, acting six days after Cosby was sentenced to three to 10 years in prison in Pennsylvania for a 2004 sexual assault involving another woman, declined to hear his appeal of a lower court ruling allowing the lawsuit brought by Janice Dickinson in state court in California to proceed.

The justices took their action in the Cosby case against the backdrop of the #MeToo movement opposing sexual assault and harassment at the same time that President Donald Trump’s nominee for a vacancy on the high court, Brett Kavanaugh, has denied allegations of his own sexual misconduct.

The court’s rejection of the case came on the first day of its new term, which runs through June.

Dickinson gave a national television interview in 2014 accusing Cosby of raping her in 1982. In response, Cosby’s lawyer Martin Singer sent letters to other media outlets warning them not to publish Dickinson’s “defamatory fabrication,” adding that she was “seeking publicity to bolster her fading career.”

Dickinson sued for defamation, claiming the letter and news release aimed to destroy her reputation. Cosby sought to toss those claims, saying Dickinson was trying to stifle his free speech rights guaranteed by the U.S. Constitution’s First Amendment.

Cosby was sentenced on Sept. 25 for his conviction on three counts of aggravated indecent assault for the drugging and sexual assault of Andrea Constand, a former Temple University administrator, at his Philadelphia home in 2004.

More than 50 women in recent years have accused Cosby, who starred in the popular 1980s sitcom “The Cosby Show,” of assault and using drugs to incapacitate them.

A California court of appeals last November rejected Cosby’s argument in the Dickinson dispute, allowing the case to proceed.

Urging the Supreme Court to take the case, Cosby had noted that in two separate cases federal appeals courts held that Singer’s statements responding to accusers were constitutionally protected speech. Cosby said in a court filing that the decision he was challenging could dissuade attorneys from asserting their clients’ innocence.