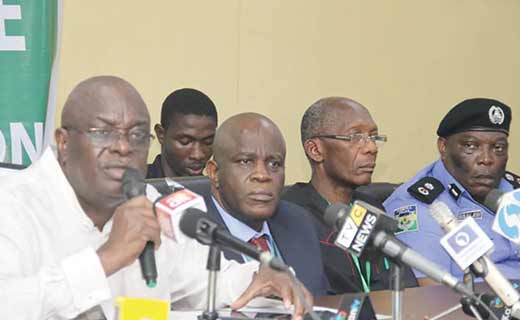 Some of the 48 governorship candidates that contested the Osun State governorship election have accused the Independent National Electoral Commission and security agencies of conniving with the ruling All Progressives Congress to steal the mandate of the people.

The governorship candidates are Mrs Mercy Ayodele of the Restoration Party; Mr Alfred Adegoke of the Socialist Party of Nigeria; and Prof Ife Adewumi of the Providence People’s Congress.

The RP candidate said, “Oyetola should be temporarily congratulated. I stand to say it is a stolen mandate. Democracy has been slaughtered in Osun State. Brute force was used against the people to steal victory and the masses are disappointed.

“The electoral process was quite discouraging and the security agencies in collaboration with the election umpire disappointed the poor citizens of Osun State. The APC victory will be short-lived,” he said.

The SPN candidate, Adegoke, who is a human rights activist, also berated the INEC and security agents for allegedly conspiring against the people in order to snatch their mandate and hand it over to Oyetola.

Adegoke said, “What happened on Thursday in Osun State was not an election. It was a charade and it cannot stand. Policemen, soldiers, DSS and other security agents gave cover to hoodlums to violently rig the election.

“What happened was more than stealing the mandate; it was a broad-day light robbery. Even the election was rigged before the election day.”

Also, the PPC candidate, who is a former chairman of the Academic Staff Union of Universities at the Obafemi Awolowo University, Ile Ife, said there was no reason to order a rerun in the areas where election had been held and the results were cancelled for irregularities.

He said the INEC seemed to have connived with the ruling All Progressives Congress to subvert the will of the majority of the people of the state.

“There is therefore no legal basis for ordering a rerun. There is no such allowance provided by or known to law.

“But there comes a time in this country when we have to learn to do the right thing. It is so sad and unfortunate that we will see light and continue to look for darkness. In any case, how does a returning officer have the power and authority to declare a rerun?

“There is nothing in the INEC guidelines or in the Electoral Act that can give validity to this illegality. But the truth remains the truth, whether spoken, contested or hushed,” Adewumi said.

Similarly, one of the chieftains of the PDP in Osun State, Dr Akin Ogunbiyi, who contested the primary election of the party against Senator Ademola Adeleke, has said the result of the Osun State governorship election will not stand.

Ogunbiyi asked Adeleke to seek redress in court in order to retrieve his mandate from Alhaji Gboyega Oyetola of the APC.

Ogunbiyi said, “The intimidation of voters, harassment of PDP leaders, journalists and domestic observers during the exercise are clear affirmation of the ruling party’s desperation to win at all cost using government institutions and thugs.”