Sep 25, 2018 Education as a vaccine, Sexual Reproductive Health and Rights 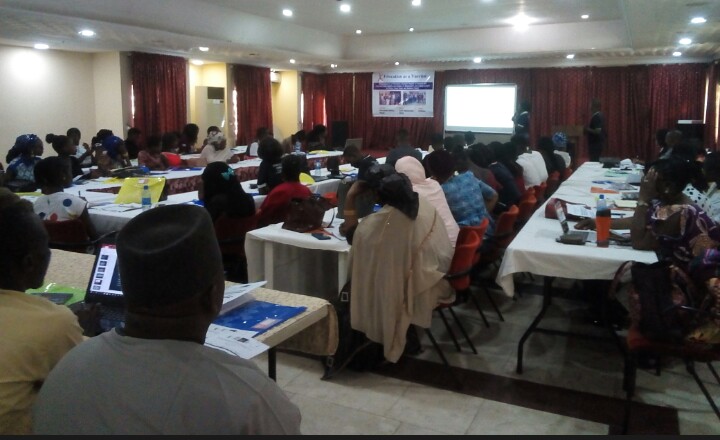 A youth-focus organisation in Nigeria, ‘Education As a Vaccine’ (EVA) has launched a situational report on sexual reproductive health and rights of the young persons in Nigeria in Abuja today.

According to Patrick Enwerem, Team Leader, Policy Influencing and Advocacy “we are here today basically to disseminate a report of situation analysis that our young advocates were able to gather in 3 states where we implemented a project titled “Youth Sexual Health and Rights Alliance”. This project was funded by “Amplified change”.

He added that the situation analysis report were put together after intensive field research, consultations and investigations during the implementation of the project, carried out in three selected states namely: Cross River, Ondo and Kaduna states.

Patrick who was also representing the Executive Director, Olabukunola Williams at the launching, stated that EVA as a Youth Focus organisation having worked with three respectable youth led organisations in these three states which are Girl’s Power Initiative, Kids and Teens Resource Center, and caRENGO in Cross River, Ondo, and Kaduna states respectively to implement the project is working towards  advocating for a policy change regarding sexual reproductive rights of young persons in Nigeria.

Explaining further the rationale behind the selection of just three states out of the 36 states in Nigeria, he said the selection was based on the state with prevalent cases of violation of sexual and reproductive rights.

“After several consultations we discovered that the incidences of violation of sexual and reproductive rights such as genital mutilation, abuses were quite prevalent in these 3 states couple with the fact that we have capable youth led organisations to work with so as to reach out to the communities within these states during the advocacy, hence the selection” he affirmed.

Also speaking at event, Kosi Izundu, Program Coordinator, Policy Influencing and Advocacy, she stated that the essence of the launching of Situation Analysis report was to make available accurate data that policy makers and Nigerian government as a whole could work with in tackling these challenges of sexual reproductive health in Nigeria.

“For instance, If there are no data that shows the damaging impacts of genital mutilation amongst young women, how would they effectively curb it? she remarked.

“Through this advocacy, we also look forward to working with other organizations and youth advocates to carry out advocacy in Adolescent Sexual Reproductive Health (ASRH) and Sexual and Reproductive Health and Rights (SRHR) as to properly engage the policy and decision makers in the area of policy engagements and implementation” she remarked.