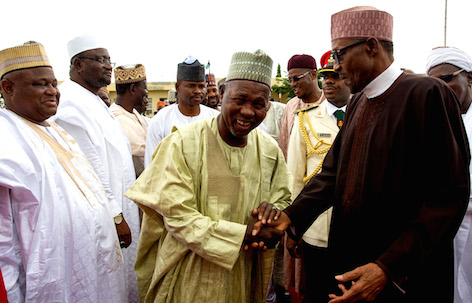 Masari made the pledge in Abuja on Thursday while answering questions from State House correspondents after a closed-door meeting with President Muhammadu Buhari at the Presidential Villa.

According to him, the people of Katsina are 100 per cent behind the president and they will continue to support him even after the elections of 2019.

“We expect based on figures coming out of the registered voters to give him nothing less than 70 to 80 per cent.

“We don’t have the figures now because they have completed additional registration, we are not talking about the last exercise that led to the election of 2015 and in 2015 he got almost 1.5 million votes from Katsina State.

“So we expect by 2019 we will be able to give him additional one million making it not less than 2.5 million votes.”

On the proposed Electoral Offence Commission, the governor stated that the Commission when operational would help to sanitise and make the elections more credible.

Masari, who also spoke on whether states should adopt direct or indirect primaries, said there was nothing contentious about the matter as the constitution of the governing All Progressives Congress (APC) was very clear about it.

He stated that already the issue had been settled as three states out of the 36 states had opted for the direct primaries.

He said: “It is not a hot cake. First of all, let me say from all the states that we have read and heard, Lagos, Kano and Niger are the only states that have opted for direct primaries in a country of 36 states plus FCT.

“I think it shouldn’t be a contentious issue. In fact, the constitution of the party is very clear, there is nothing contentious in this.

“The constitution of the party recognises direct, consensus and indirect primaries,

“So whichever method is adopted, nobody is breaching the constitution of the party so what is the big deal about it.” (NAN)