FEMA confused over cause of Abuja earth tremor 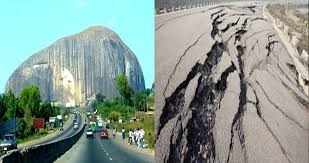 Few days after some Abuja residence experienced earth tremor in areas such as Mpape, Maitama, Gwarinpa and Kubwa, the FCT Emergency Management Agency (FEMA) has expressed uncertainty over the cause.

Mr Idris Abass, the Director-General of the agency told the News Agency of Nigeria (NAN) on Tuesday in Abuja, that the agency was yet to establish whether it was man-made or natural.

He however said that if it was a natural phenomenon, nothing would stop it because it could only stop on its own.

“Like the information we earlier passed, it only happened for a while and stopped, but today we are happy to report that there is no case of the tremor again.’’

The D-G said that it had not been established whether the tremor was man-made or natural.

He noted that if it was natural, it was bound to happen again after 12 years.

“If it is caused by the activities of those who are blasting and drilling boreholes around the areas, it can also reoccur. Abass however said that the activities of the drillers had since been stopped, adding that if it was man-made it should not reoccur until their activities returned.

“We are carrying out adequate steps to determine what happened last week; maybe it is a natural cause, but we want to assure the public that Nigeria is not on the zone of earthquakes.

“Some people are arguing that tremor is an earthquake, earthquake is the total destruction of activities, buildings and the earth itself.

“From what we have seen, there is no trace of any crack on the wall or on the earth when the shaking occurred,’’ he said.

He said that FEMA would collaborate with other agencies, especially the Geological Survey of Nigeria to ensure that it unraveled the situation.

“On our own part, we are developing the response plan for this kind of emergency disaster.’’

He said that FEMA would embark on advocacy and sensitisation to the general public to tell them what to do and what not to do in case of any reoccurrence.

He said that FEMA would also inform the public that if it was a natural phenomenon, adding that nothing could be done to stop it.

41 thought on “FEMA confused over cause of Abuja earth tremor”