Why the word ‘’peacebuilding’’ must get into dictionary before September 21st 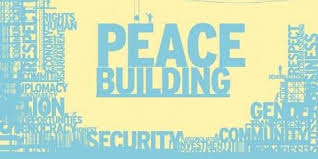 Foundation for Peace Professionals (FPP) is part of a global campaign to get the word ‘’peacebuilding’’ into dictionaries on or before 21st September 2018.

We have teamed up with other organizations around the world to advocate for the inclusion of peacebuilding into dictionaries to celebrate this year’s International Day of Peace.

In many history books and academic materials, war mongers are usually painted as legends and their stories often told over and over again with so much glitz and fanfare. Stories of great Empire’s all over the world are usually stories of war and war mongers, not that of peace and peacebuilders.

It starts with small omissions like not having the word, ‘’peacebuilding’’ in the dictionary, whereas, ‘’warmongering’’ is properly captured.

The word, ‘’peacebuilding’’ is not in any dictionary and we must make some efforts to prevail on the publishers of the dictionaries to get into it on or before 21st September, 2018.

In the past 6 months, Foundation for Peace Professionals (FPP) has used the word, ‘’peacebuilding’’ more than 100 times. In our recently published Nigeria peace Index (NPI), a national replica of the renown Global Peace index (GPI), the word ‘’peacebuilding’’ was repeated close to 30 times.

For organizations like ours and several of its kind around the world, the word ‘’peacebuilding’’ is an indispensable word that can’t escape being used in our daily conversation.

While the word ‘’peacebuilding’’ is being used on daily basis by individuals and organizations working to safeguard humanity against war and violence, it has never occurred to many that the word itself doesn’t exist anywhere in the dictionary.

This is why it was more like a surprise, when Mr Mike Jobbins, Head of Policy and Partnerships at Search For Common Ground (SFCG), a global peace building organization contacted us to bring this to our attention and also informed us about the effort of their organization in partnership with International Alert to get the word into the dictionary on or before the 21st of September 2018.

We at the Foundation for Peace Professionals (FPP) support this campaign and we urge all lovers of peace to join us by tweeting at the dictionaries to include the word ‘’peacebuilding’’ in the dictionary on or before 21st September 2018. We also commend Search for Common Ground and International Alert for leading this process.

Although, there is no universal definition for peacebuilding, but the definition adopted by International Alert says, ‘’peacebuilding is the action of seeking to build peace’’.

It has been stated that, if the word, ‘’WARMONGERING’’ which means action of seeking to bring about war could find its way into dictionaries, ‘’PEACEBUILDING’’ which seeks to bring peace also needs to get in there as quickly as possible.

As the world continue to search for peace, let us, as a matter of necessity, give peacebuilding more attention and space, starting with including the word ‘’peacebuilding’’ in the dictionary on or before 21st September 2018.

Abdulrazaq O Hamzat is a Human Rights Ambassador and an Executive Director at Foundation for Peace Professionals (FPP). He can be reached at discus4now@gmail.com