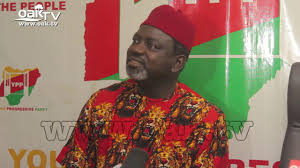 In what seemed like a victory carnival in Abuja today, Leadership Development expert and Imo Guber candidate from the Young Progressive Party (YPP) received his party nomination form.

In line with the time table for the 2019 general elections and the political party calendar from the Independent Electoral Commission, the form purchased makes Okorie the candidate of choice for Imo State governorship race.

The YPP, he said is a party given to service and integrity and is set to capture the bulk of Imo votes during the elections as the party also hopes to win even at the presidential level.

In the presence of media professionals across all strata, representatives of the Imo Nke Anyi movement representing the 27 local government areas in Imo state, party officials as well as friends and well-wishers, Okorie gave a very reassuring speech on the mission to Imo State. Being a man well respected and also been groomed since age 19 in leadership, Okorie shared his plans to make Imo a world-class state full of endless possibilities even as he reeled off his plans in all sectors.

With the dance troupe, convoy and cheers, Abuja stood still as the YPP secretariat received the massive, happy and orderly adherents of this Nigerian who spells hope for his people.

The public and people of Imo may be getting their youngest governor as Okorie is not even 45 years old yet.

Linus Okorie is the President of Guardians of the Nation International, and Principal partner of New Vision consults and have groomed millions of people across the world on leadership before aspiring to serve as the Imo State Governor.