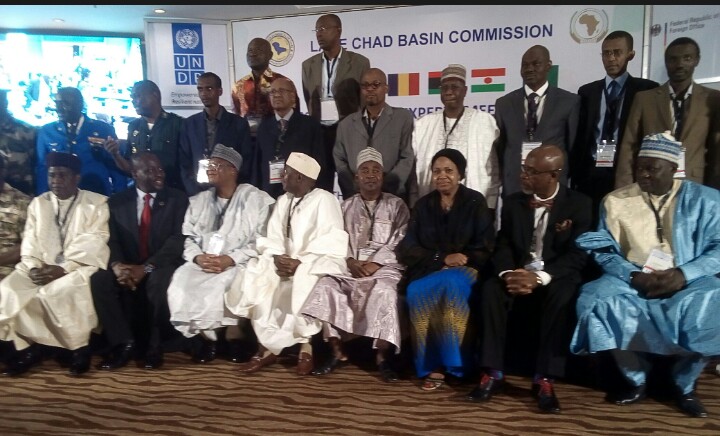 Ten ministers from Lake Chad Basin Commission (LCBC) Members States and the Country Director, UNDP Nigeria, Samuel Bawyal  had converged in a ministerial conference alongside other renowned experts towards the validation of the draft Regional Strategy for Stabilization, Recovery and Resilience in Abuja yesterday.

The meeting which was a renewed commitment and collaborations amongst the LCBC and the African (AU), supported by UNDP, was aimed at addressing the devastating impact of Boko Haram insurgency on communities in countries within the Lake Chad Basin.

At the Conference, UNDP Resident Representative in Nigeria, Mr. Edward Kallon, gave a brilliant key note speech delivered by Dr Samuel Bawyal that set the right platform for effective and productive conversations and discourse during the meeting.

Read his full speech below:

HE Excellency Professor, Osinbajo GCON, The Vice President of the Federal Republic of Nigeria

Members of the diplomatic corps and development partners

Representatives from ministries, departments and agencies

Colleagues from the United Nations System

It is an honor for me to be here with you this morning and be part of the opening ceremony of this important validation process of the Regional Strategy for the Stabilization, Recovery and Resilience of the Boko-Haram affected areas of the Lake Chad Basin. Over the next few days, we will have the opportunity to discuss, debate, and internalize the draft Strategy that has been developed by the Lake Chad Basin Commission and the African Union Commission. I want to take this opportunity to congratulate these key partners for their leadership in this process and convening this Experts’ Meeting and the Ministerial Conference planned for later this week.

These meetings are a critical stepping stone towards a resolution of the crisis around Lake Chad. For decades, the Lake Chad Basin has been plagued by underdevelopment, weak governance, low levels of education, and exclusion of women and youth in decision-making structures, and a myriad of environmental challenges that have been exacerbated by drastic climate change in recent times. As the Lake Chad water levels, which have historically provided a lifeline to millions in the sub-region, have diminished and become increasingly unpredictable, the prospects of supporting an ever-increasing population and demographic pressures have become even more challenging. These root causes underpin the general cycle of violence seen in the sub-region – both in terms of increased banditry and a resilient insurgency.

Despite these challenges, we must forge ahead and not forget that the sub-region has historically been a hub of transnational trade and prosperity. Using the Lake Chad as a conduit for economic activities, communities around the Lake region have had strong sub-regional ties, with interdependent and mutually beneficial economic relationships. We must not forget this history of the sub-region. This history provides hope for millions of people that things might one day get better. It also provides a precedent for uniting communities, ethnicities and religions that have been torn apart by years of conflict and violence. Uniting people through the building blocks of recovery and resilience-strengthening is essential.

The United Nations has been closely accompanying the relief and recovery efforts of national governments around Lake Chad in addressing the needs of those most affected by the crisis. In March 2017, the United Nations Security Council visited the four Member States around Lake Chad, and resultantly passed the UN Security Council Resolution 2349 (2017). UNSCR 2349 calls for regional organizations to develop a comprehensive strategy, that “effectively addresses the drivers that contributed to the emergence of Boko Haram and ISIL, with a particular focus on longer term development needs”. The transnational nature of the crisis demands a regional response that contributes to a holistic and integrated approach for partners to collectively work together to address the complex set of challenges that have resulted from decades of underdevelopment and violence.

It is against this background that a regional approach has gradually evolved into what now is the regional strategy. Calls for a stronger regional response to the crisis could be heard both at the Oslo Humanitarian Conference in February 2017 and at the Senior Officials’ Meeting on Prevention and Stabilization in the Lake Chad Basin in September 2017. These calls were fully answered by the African Union Commission and the Lake Chad Basin Commission, who have convened a series of key meetings with stakeholders, beginning in November 2017, to help guide and lead the development of the strategy. Our being here today is a testament to the determination, commitment and success of this process.

The United Nations will continue to be a partner to the Lake Chad sub-region as it continues its path towards stability, recovery and resilience. We continue to support those who need lifesaving assistance, whilst at the same time supporting Member States to build longer term resilience for affected populations. With support from the German Government, a flagship project has been launched by the United Nations Development program, UNDP, to support regional stabilization which, amongst other achievements, facilitated the establishment of the Lake Chad Basin Governors’ Forum in May of this year as well as supported the development of the regional stabilization strategy. As the regional strategy is finalized, UNDP and the entire UN system stands ready to support, where it may be necessary, partners to ensure an inclusive, sustainable, and accountable implementation of the strategy to help lift millions of vulnerable people out of poverty, stop the continued violence, and put the Lake Chad sub-region on a path to sustainable development.

Allow me to most sincerely thank the Honorable Minister and the Federal Government of Nigeria for hosting this event. A special token of my appreciation goes to the African Union Commission and the Lake Chad Basin Commission for not only facilitating and convening this meeting, but also for leading the process of developing the strategy. I wish to also thank the German government as one of our key partners for stabilization of the Lake Chad sub-region and having contributed financially to this process. I also want to appreciate colleagues from UNDP Regional Service Centre, Cameroun, Chad Niger and Nigeria for the support they have rendered to this process and indeed to the holding of this experts meeting here in Abuja.  Finally, allow me to also express my gratitude to all of you, distinguished participants and experts who are here today and whose contributions, feedback and interventions will help to strengthen the inclusivity, coherence and substance of this strategy even further. I wish you all fruitful deliberations.

I thank you all for your attention.