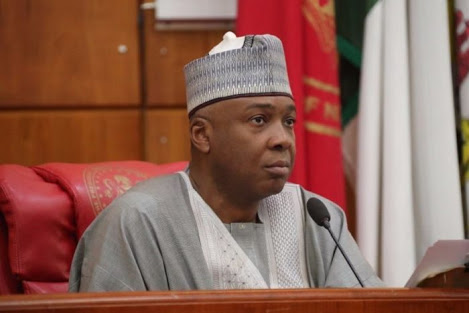 Nigeria’s Senate President, Bukola Saraki has finally responded to the recent insinuations coming from some of the APC stalwarts and supporters headed by Bola Ahmed Tinubu, following his defection saga from the supposed Rulling Party, APC to the opposition party, PDP.

Read his response below:

I have always restrained from joining issues in the media with Asiwaju Bola Ahmed Tinubu and this is based on my respect for him. However, I will not allow him to create a wrong, false and mischievous impression about the reasons for my decision to exit the All Progressives Congress (APC) and present his prejudice as facts for public consumption.

I have been consistent in my complaints to all leaders of the APC, including Tinubu, that a situation where the National Assembly is not constructively engaged or carried along in key policy decisions, particularly those that will eventually require legislative approval, is not in the best interest of the nation. No genuine leader of the legislature will be comfortable that the Presidency will simply write a terse letter to the National Assembly on key issues which the federal legislature is expected to later deliberate upon and give its approval. The Buhari administration consistently treats the legislature with contempt and acts as if the lawmaking body should be an appendage of the Executive. To me, this is unacceptable.

In the same way, I find it very objectionable that many stakeholders who worked strenuously to get the administration into office have now been excluded in the government and not consulted on key decisions as necessary and expected. In fact, some of them are treated as pariahs. A party that ignores justice, equity and inclusion as basic pre-conditions for peace, unity and stability cannot sustain its membership and leadership.

Let me redirect the attention of the former Governor of Lagos State to the aspect of my July 31, 2018, statement announcing my exit from APC in which I emphasized that the decision “has been inescapably imposed on me by certain elements and forces within the APC who have ensured that the minimum conditions for peace, cooperation, inclusion and a general sense of belonging did not exist”.

In that statement, I further noted that those APC elements “have done everything to ensure that the basic rules of party administration, which should promote harmonious relations among the various elements within the party were blatantly disregarded. All governance principles which were required for a healthy functioning of the party and the government were deliberately violated or undermined. And all entreaties for justice, equity and fairness as basic precondition for peace and unity, not only within the party, but also the country at large, were simply ignored, or employed as additional pretext for further exclusion. The experience of my people and associates in the past three years is that they have suffered alienation and have been treated as outsiders in their own party. Thus, many have become disaffected and disenchanted. At the same time, opportunities to seek redress and correct these anomalies were deliberately blocked as a government-within-a-government had formed an impregnable wall and left in the cold, everyone else who was not recognized as “one of us”. This is why my people, like all self-respecting people would do, decided to seek accommodation elsewhere”.

Tinubu himself will recall that during the various meetings he had with me at the time he was pursuing reconciliation within the APC, I raised all the above issues. I can also vividly recall that he himself always expressed his displeasure with the style of the government and also mentioned that he had equally suffered disrespect from the same government which we all worked to put in office. I also made the point that whatever travails I have gone through in the last three years belong to the past and will not shape my decisions now and in the future.

However, during those meetings, the point of disagreement between Tinubu and I is that while I expressed my worries that there is nothing on ground to assure me that the administrative style and attitude would change in the next four years in a manner that will enable us to deliver the positive changes we promised to our people, he (Tinubu) expressed a strong opinion that he would rather ‘support a Buhari on the hospital stretcher’ to get a second term because in 2023, power will shift to the South-west. This viewpoint of Tinubu’s was not only expressed to me but to several of my colleagues. So much for acting in national interest.

It is clear that while my own decision is based on protecting the collective national interest, Tinubu will rather live with the identified inadequacies of the government for the sake of fulfilling and preserving his presidential ambition in 2023. This new position of Tinubu has only demonstrated inconsistency — particularly when one reviews his antecedents over the years.

Again, let me reiterate my position that my uncertain and complex relationship with Tinubu has been continually defined by the event of 2014 when myself and other leaders of the APC opposed the Muslim-Muslim ticket arrangement about to be foisted on the APC for the 2015 polls. It should be noted that he has not forgotten the fact that I took the bull by the horns and told him that in the interest of the country, he should accept the need for the party to present a balanced ticket for the 2015 General Elections in terms of religion and geo-political zones. Since that time he has been very active; plotting at every point to undermine me, both within and outside the National Assembly.

It is a surprise to me that Asiwaju Tinubu is still peddling the falsehood about the fact that my defection is about automatic ticket and sharing of resources. Members of the public will recall that when the issue of my decision to quit APC came to the fore and many APC leaders were holding meetings with me, a newspaper owned by the same Tinubu published a false report about the promise of automatic tickets, oil blocks and other benefits. I immediately rebutted their claims and categorically stated that I never discussed any such personal and pecuniary benefits with anybody. My challenge that anybody who has contrary facts should come forward with them still remains open.

It should be known that Democracy is a system that allows people to freely make their choices. It is my choice that I have decided to join others to present a viable alternative platform for Nigerians in the coming elections. Tinubu and leaders of the APC had better respect this decision or lawfully deal with it. As for me, Allah gives power to whom He wishes. Human beings can only aspire and strive to fulfill their aspirations.