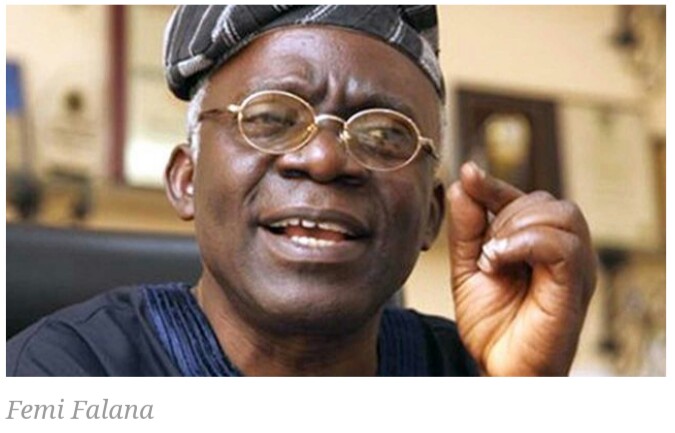 Mr Femi Falana, A Senior Advocate of Nigeria (SAN), has said that he does not believe in the report that Lagos State was the third most dangerous city to live in the world.

Falana debunked the report on Sunday evening during the investiture of Mr Kayode Opeifa, the former Commissioner for Transport in Lagos State as the President of Rotary Club.

The News Agency of Nigeria (NAN) reports that Opeifa was decorated the 35th President of Rotary Club of Agege District 9110 of Nigeria at Sheraton Hotel, Ikeja in Lagos State.

NAN also reports that Falana was reacting to a report by the Economist Intelligence Unit, EIU, that ranked Lagos State as the third worst city to live in among 140 cities worldwide.

Part of the EIU report stated: “With a relatively low score of 38.5 percent, the city was just a little above Syria’s war-torn capital, Damascus, and Bangladesh’s Dhaka.”

Falana said, “I dont believe Lagos is the third dangerous city to live in because there many cities in other countries that are more dangerous than Lagos.

“The Lagos State Government should quickly respond to this report and let people know that the state is safe for people .

“The only challenge we are facing is that the quality of our representation in government is low, at the state, local government and federal levels.

” Lagos alone has 24 members at the Federal House of Representatives, let us be sincere to ourselves how many of them do we hear about?

“We have 40 legislators in the state house of assembly, what is the quality of the debate there?

Who are the people representing us at the various local government levels ?”

Falana, therefore, advised the residents of the state to always challenge their representatives at both the National and state assemblies on proactive legislation.

He said that legislators from Lagos and the South West should stand out for the good of their states and not go to the assemblies to dance.

The lawyer also appealed to the Rotary Club members to do what they could to make the society a better place for all .

Also, Mrs Folashade Ayoade, the Secretary to the Government of Kogi, who was the Guest Speaker at the occasion also advised Rotarians to inspire the people around them through their humanitarian services.

Ayoade urged the people to be of good value, truthful and be people of inspiration to others for a better society.

“We must lead an authentic life, truthful and honest, and understand that God created you differently so you need not copy anybody.

“We need to stand for good values since so much is expected from the Rotarians and they need the support of eminent personalities and all of us in the society to succeed.

“I want to urge each and everyone of us to support the great gesture of the Rotary Club,” she said.

Opeifa had earlier in his opening remarks said that Agege Rotarians had identified six areas of focus that were part of the the United Nation’s Sustainable Development Goals.

These are: Maternal Child healthcare, prevention of diseases, resolution of conflicts, empowerment programme for our communities and education and literacy.

The rotary president said that the club was also aiming at positively touching the lives of 10 per cent of the people in the community.

He added that the club would also be reaching out to at least 300,000 people p by providing them electricity through its solar power project.

He also said that the club was working toward distributing school bags and uniforms to about 1,000 students.

Opeifa said that he also planned during his tenure to embark on selfless services and get more members admited into the Rotary Club.