#TorontoShooting: Gunman kills a woman and a child in Greektown 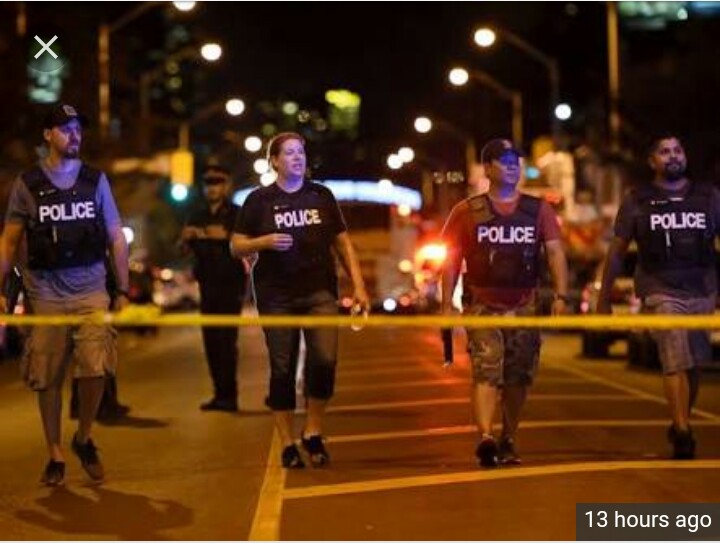 A 10-year-old girl and an 18-year-old woman have died after a gunman opened fire on a busy avenue in Canada’s largest city, police say.

Thirteen other people, ranging in age between 10 and 59, were injured in the attack in the Greektown district of Toronto, police chief Mark Saunders told reporters.

The suspect, 29, had an exchange of gunfire with police officers before being found dead nearby.

The motive for the shooting is unknown.

Police have not identified the suspect, who was from Toronto, and it is unclear if he was killed by police gunfire or took his own life.

The attack happened on Sunday evening. In a video clip shared by Canadian media, a white man wearing a dark cap and dark clothing and carrying a shoulder bag can be seen stopping on a pavement and pulling out a handgun before firing shots.

Prime Minister Justin Trudeau sent his sympathies to the victims and the city in a tweet, while Toronto Mayor John Tory condemned the “despicable” attack on “people innocently enjoying a Sunday evening”.

Emergency services were called out just after 22:00 (02:00 GMT Monday). The site of the attack is a piazza with a fountain that is popular with local people and was busy at the time, the Toronto Globe and Mail writes.

A number of people were reportedly hurt in a cafe called the Demetres, while others were hit in the street.

Det Sgt Terry Browne, who is leading the investigation into the shootings, told reporters on Monday that “some individuals have what may be described as life-changing injuries” following the attack.

According to the Special Investigations Unit (SIU), which looks into incidents involving police which result in death, the gunman was tracked by officers to Bowden Street, a short distance from the cafe.

“An exchange of gunfire” then took place, before the man fled once more. He was found dead about 100m (328ft) away on Danforth Avenue.

15 thought on “#TorontoShooting: Gunman kills a woman and a child in Greektown”