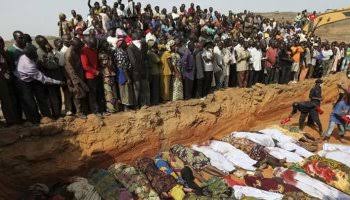 Following the recent tragic incident in Plateau State, which took place in 11 villages in three local government areas and claimed several lives, Foundation for Peace Professionals (FPP) which has been working behind the scene to prevent the outbreak of crisis several weeks before the tragic incident took place would like to urge the Plateau state government to set up an anti-crime force to combat organized criminality in state. This is very important because the major cause of crisis in the state is criminality, not ethnicity or religion as being insinuated by many.

In the past two months, FPP through its coordinator, have been working on building peace and preventing crisis in Plateau State. Following a report, received through our early warning system that over 300 cattle were rustled by cattle rustlers along Jos South, Barkin Ladi axis, FPP initiated a mediation effort to build understanding particularly between farmers and herdsmen and we went on advocacy visit to several stakeholders including Miyetti Allah, Cultural leaders and organizations across Barkin Ladi, Bokkos and Mangu Local Government area to impress the need for joint problem solving approach on the matter.

The incident of cattle rustling was reported to all security agencies and they all made efforts to recover the said missing herds, but recorded no success. As the search for the herds continue, some of the victims informed the security officials that they have found the where about of their animals and they mentioned the possible location where the animals were kept. However, the security didn’t believe in this information because the herds don’t have tag, neither do they have any identification to ascertain the claims of the victims. Since almost all tribes and religion in Plateau State rear herds, it is almost impossible to ascertain the genuineness of the claim.

Last week, before the outbreak of crisis and while the whereabouts of over 300 herds are yet to be resolved, some unidentified criminals massacred a herdsman and took his herds away. This particular incident triggered a reaction that claimed several lives and properties, though it wasn’t properly reported. As a result of this crisis, some bandits in Mai Rana, a village in Mangu local government area seize the opportunity to block roads and in the process, killed a butcher who went to collect debt from his debtor in the village. Upon getting notification of the situation through our early warning system, we promptly notified the Plateau State Peace Building Agency, Station Task Force (STF) and Police and they all responded almost immediately by deploying officers to maintain law and order. The vigilante group in the area also mounted patrol through out the market day (21/06/2018). It is important to note that, if not for FPP’s prompt intervention, this incident would have triggered a crisis in the local government adjudged to be the most peaceful in the state.

Let it be stated that, FPP cannot explain the reason for the current crisis that broke out this week, but what we can say however is that, there is a well coordinated criminal gang responsible for most incidents that is happening and setting the people against each other.

Two days ago, after the crisis that broke out early in the week, FPP prevented another major crisis that could have happened few days ago, precisely on 27th June 2018. On the said date, at about 1236hours, one Magaji Aliyu, a resident of Kerana, Bukuru, Jos South local government area came down from a vehicle at Gyero Junction while going to his home. He was attacked and stabbed by some armed bandits who appeared from nowhere. He was rushed to a clinic known as Sunna clinic at Kukuru for treatment. Immediately the incident occurred, FPP received alert through our early warning system and we promptly called the various security agencies to avert any response that may arise from the unfortunate incident. We called Maj. Omar of Station Task Force (STF) headquarters, IGP monitoring team, the Director General of Plateau State Peace building Agency and the Sector 5 Commandant in the state, all of whom responded with the speed of light. The Sector 5 commandant and his team got to the scene within 5 minutes of the incident and together, we pleaded with the Bukuru Youth Forum and other stakeholders to resist the temptation of taking any action that may lead to further crisis. The forum and others helped appeal to the youths to avoid any reprisal attack and normalcy was returned. However, due to the severity of the wound of the victim, he has been transferred to Aminu Kano teaching Hospital in Kano State for further treatment.

We would like to state that, nothing can justify rustling of cows, which automatically deny the victim of means of livelihood.

Our suggestion
We call on all Nigerians to stop giving shield to criminals by affiliating them with any tribe or religion. It is our view that, such psychological protection often makes it difficult for security agencies to handle criminal situations effectively, as members of the claimed ethnicity or religion would make such issues complicated and ultimately, simple issue of criminality would eventually degenerate into something worse.

There should be National Emergency numbers widely circulated to people in all part of the troubled local governments, as well as enough communicating gadgets to security officials for prompt intervention.

The state government should place an embargo on road blocking by unauthorized persons or groups.

Mandatory tag for all large animal of free grazing.
—