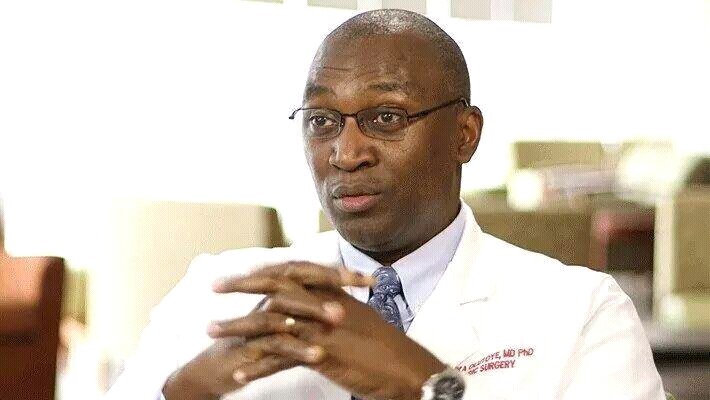 NIGERIA shone brightly on the global stage as the news broke early in the week of a successful surgery a team of medical doctors, led by Nigerian-born Dr. Oluyinka Olutoye, carried on an unborn baby at a Texas hospital in the US.

According to medical reports, the unborn baby had sacrococcygeal teratoma, a rare tumour that appeared at the base of the baby’s tailbone. These types of tumours, it is estimated, occur in about one of 40,000 pregnancies, and if left unchecked, could continue taking the baby’s blood supply and eventually cause heart failure.

The baby’s mother, Margaret Boemer, first sensed that all was not well when her ultra-sound technician stayed unusually quiet during a routine 16-week prenatal checkup. Subsequent tests later showed that Boemer’s unborn child was suffering from the rare tumour.

One of the hospitals she visited in Houston, according to reports, “strongly recommended” that she should terminate the pregnancy. The report further had it that the hospitals reasoned that performing open fetal surgery -removing the baby before term in order to operate on the fetus—was too risky.

But Margaret Boemer’s story changed when she got to the Texas Children’s Hospital, where the doctors examined the tumour and gave her some words of hope. Interestingly, two doctors at the hospital, Oluyinka Olutoye and Darrell Cass, had about seven years ago, successfully performed a similar surgery.

Seven years after, Oluyinka Olutoye and Darrell Cass, alongside a team of about 20 others, performed yet another ‘miracle’ when it carried out a successful surgery on the unborn baby to remove the tumour and returned it to the mother’s womb; a feat that has generated global recognition of the baby as the baby born twice.

To carry out the operation on the baby named Lynlee Hope at 23 weeks, Olutoye and his team removed her from her mother’s womb, operated on her and then returned her to the womb where the injuries from her operation healed and she continued to grow until she was born again at 36 weeks.

According to reports, while Olutoye and his team were in the middle of the procedure, the baby’s heart stopped and needed to be restarted. She also required a blood transfusion at a stage.

Coming at a time when the image of the country is being bashed on the international scene by loads of negative reports about her citizens, Nigerians from all walks of life shelved their tribal and religious differences and rolled out the drums to celebrate the rare feat by one of their own.

The Federal Government had set the tone for the celebration when it felicitated with Olutoye and the people of Nigeria on the feat. According to a statement issued by the Senior Special Assistant to the President on Foreign Affairs and Diaspora, Hon. Abike Dabiri-Erewa, President Muhammadu Buhari received the news of Dr. Olutoye’s unique feat with excitement and fulfillment and looked forward to meeting with him soonest.

“Nigerians are great people, making greater positive impacts in all fields of human endeavour in the Diaspora. Dr Olutoye’s feat is one of such testimonies,” the statement added.

In an exclusive interview with The Nation, Dr. Olutoye said he was humbled by all the attention the feat had generated.

He said: “I am truly humbled by all the attention that this has received. It is a privilege to work at Texas Children’s Hospital and Baylor College of Medicine, to lead a team of talented physicians, nurses and others to provide care for Margaret Boemer and her baby Lynlee. It is a blessing to be able to care for families like the Boemers in their time of need.

“We should not forget that these brave parents are the ones who did not give up on their child but sought to do all they could to improve her outcome. They deserve the focus and attention. For me to be caught up in all this excitement is only by the grace of God.”

Olutoye, who obtained his medical degree from the Obafemi Awolowo University, Ile-Ife, Nigeria, in 1988 before his doctoral degree in anatomy from Virginia Commonwealth University in Richmond, VA, in 1996, had relocated from Nigeria to the US to seek further educational opportunities.

He said: “At the completion of my medical education in Nigeria, I realised that I read about a lot of different aspects of medicine that I didn’t have the opportunity to be exposed to locally. I therefore sought further educational opportunities in the United States.”

The Ido Ani, Ondo State-born surgeon is a son of Major-General Olufemi Olutoye (rtd) and Prof. Omotayo Olutoye. He described his childhood as wonderful.

“It was, and still is, a wonderful loving environment. We were all taught the importance of hard work and a solid education, and most importantly, the fear of The Lord. I hail from Ido-Ani in Ose Local Government Area of Ondo State, and my father is the Alani of Ido-Ani, Oluwatomiloye the 1st.”

As a son of a soldier father and an academic mother, Olutoye said he was introduced early in life to a life that placed emphasis on the need to strive for excellence. He maintained that the character his parents helped him to inculcate as a child has endured till now.

He said: “The quest for excellence was introduced at an early age. I attended elementary school at Lagos University Staff School and subsequently King’s College Lagos. The character and friendships established in those formative years have endured to date.

“I proceeded to Obafemi Awolowo University, Ile-Ife for my medical education at the Faculty of Health Sciences. There I met my beautiful bride (Prof. ‘Toyin Olutoye, nee Balogun) who is an anesthesiologist.   We are blessed with two children. I had further training at the Lagos University Teaching Hospital, Idi-Araba, prior to seeking additional training in the USA.

Despite the deluge of negative stories about Nigerians back home, Olutoye and many other Nigerians in the Diaspora have continued to do great exploits in their host countries. According to Olutoye, such feats are possible when they have access to resources and infrastructure.

“Nigerians are a talented people. If they decide to apply themselves, they can achieve much. When they then have access to resources and infrastructure, they can attain even greater heights,” he said.

In the face of growing desperation by young Nigerians who risk their lives to cross the Mediterranean just to get to Europe and America, Olutoye urged Nigerian youths to always note that the grass is not always greener on the other side of the divide.

“Do the best you can with what you have where you are. To quote Eleanor Roosevelt, the grass is not always greener on the other side. Look before you leap,” he said.

Given the global attention the feat may have attracted to Olutoye and his colleagues at the Texas hospital, one may want to believe that the people behind the feat would now walk around town with shoulders raised. For Olutoye, however, “such glory should be given to God.”

“I am the same person I was before. It is not about me. I give God all the glory.”