#Osun2022: “De-Registration of our Party, ADC shows INEC is bias, tries to bully us to silence” – ADC Chairman fumes 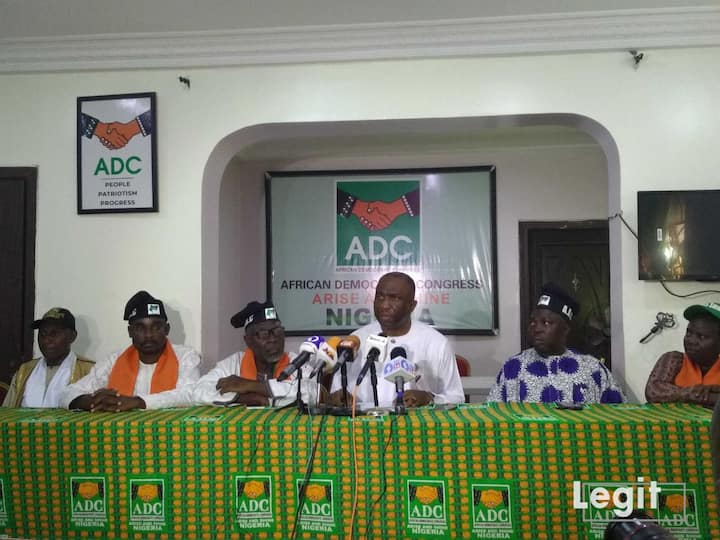 Nigeria’s electoral umpire has been condemned for de-registering the African Democratic Congress for flying a 33-year-old deputy governorship candidate ahead of the Osun election.

The chairman of the ADC said the party has done nothing legally wrong by selecting a young person as its deputy governorship candidate.

According to the party, INEC should have called for a substitution of the candidate since his emergence was not done through a primary election process. The African Democratic Congress (ADC) has accused the Independent National Electoral Commission (INEC) of threatening and bullying it by registering the party four months to the July 16, Osun governorship election.

Speaking at a press briefing in Abuja on Friday, March 25, the national chairman of the ADC, Raphael Nwosu said the electoral body erred by de-registering the party due to the age of the running mate to the 2022 Osun governorship candidate.

Nwosu said it is wrong for INEC to have de-registered the ADC because it presented a 33-year-old as deputy governorship candidate.
INEC had earlier published a list of parties that failed to meet up with its guidelines conduct of primary elections and nomination of candidates ahead of the governorship election in Osun state.

The commission had also in a statement signed by its national commissioner and chairman, information and voter education, Festus Okoye, said those who would make the list must be candidates who emerged from valid primaries.

According to the INEC commissioner, the nominations of ADC was not published for the party’s failure to comply with the commission’s guidelines on Political Party Operations (2018) or the Constitution of the Federal Republic of Nigeria 1999 (as amended).

Okoye also said that the commission had already communicated this position officially to the affected Political Parties.

However, speaking on the issue, Nwosu said the party received a call from INEC on Wednesday, March 24, on its decision to de-register the ADC.
Nwosu said:

“They called and when we asked why they followed it with small threats and black about the legal implication and all of that.

“There is nothing illegal or fraudulent that the ADC has had done, if you want to figure out fraud, you know where to go to not ADC.”

Noting that INEC had raised an issue with the party fielding a 33-year-old as the running mate to its Osun governorship candidate, Nwosu said ADC conducted its primary election and elected its candidate in line with the provisions of the law.

“Regulatory authorities should not work to undermine the organization or bodies that they regulate. What INEC should have done would be to notify the party on such an issue and not to outrightly de-register it.

“The Electoral Act makes it clear when a party can go for substition and there is still time for that but INEC is trying to totally bully ADC out of this.”

Stating that the deputy governorship candidate did not emerge through an election process, INEC could have called for a substitution and not de-registering the party.

He added: “The person in question did not go through any primary election as a running mate and can be substituted should the need arise.

“We are backed by the constitution and the Electoral Act but INEC seems to be distracted because they are looking through a small prism.”
Youth participation in politics Further stressing the need for youth encouragement participation in Nigerian politics, Nwosu urged the electoral body to always ensure that the young people are welcomed at all times.

He stated that the ADC is concerned about the involvement of youth in Nigerian politics despite the passing of the Not Too Young to Run Bill.
He said:

“If in Finland and other countries people are becoming presidents at age 28 why can’t we take the cue and encourage young people among us. I at 25 years you can be a legislature, then you are mature enough to lead the nation.

“At 28, General Gowon became the Head of State, what has changed now that young people cannot be allowed to take the lead.”

The 22 parties were among the 74 de-registered in 2020 by INEC following their poor performances in elections. The Supreme Court justice, Ejembi Eko, voided and set aside a judgment of the Court of Appeal which had nullified the de-registration of the parties by INEC.

The development came less than two years after the electoral body deregistered 74 political parties due to their poor performance in the 2019 general elections.

Responding to a Freedom of Information request INEC said between 2019 and December 14, 2021, about 107 political associations had applied for registration.