‘We are glad all our Projects ended with Major Milestones!” – CS-SUNN PINNS 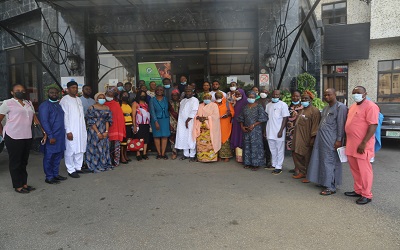 The journey to the successes recorded by CS-SUNN in the last three years under the Partnership for Improving the Nigeria Nutrition System (PINNS) project ended in September 2021, at the PINNS close-out/end of project dissemination meeting held recently in Abuja.

CS-SUNN brought together nutrition stakeholders spanning across civil society, Ministries, Departments and Agencies (MDAs) at the National and State levels, Development partners, Donors and the Media to disseminate the PINNS project successes, achievements, lessons learnt and also share next steps of the project with stakeholders in order to get their buy in.

At the meeting, Chairman Board of Trustees CS-SUNN, Dr. Bamidele Omotola told stakeholders that “over the years, on annual basis, the program has helped the states to be able to track and follow funds meant for nutritional purpose while also making it part of the budget process”.

He noted other achievements recorded during the life span of the project to include improvement in the policy environment (national nutrition policy was domesticated), while also developing multi-sectoral plans.

For Kano state, a Director with Ministry of Planning and Budget Kano state, Muktar Yakasai, said “CS-SUNN enhanced our capacity to be able to develop the Kano Food and Nutrition policy because before they came to Kano, we did not have that policy on ground.

But with the presence of CS-SUNN, we have been able to draft the policy and Kano state has developed a multisectoral plan of action for nutrition which gives a clear direction and strategy for implementation of interventions in our line MDAs, that policy has been approved so we appreciate CS-SUNN for that”.

“Our policy was developed in 2017 but it was not printed. CS-SUNN supported the state to develop the multi sectoral plan. They supported us to print these two documents. They supported the states to launch these documents. We express our deep appreciation to CS-SUNN for this support. It will go a long way to improve implementation of nutrition strategies in Kaduna states”, said Kaduna State counterpart, Director Aid Corporation, Kaduna State Ministry of Budget and Planning, Salisu Baba Lawal.

Also speaking, the State Nutrition Officer for Niger State, Mohammed Asmau, said “the coming of the PINNS project to Niger state introduced enormous changes that have led to improved discussions around nutrition. She explained that prior to the project, Niger state had about 13 qualified nutrition officers to cater for nutrition related health challenges of the state’s entire population, but the coming of PINNS has helped in increasing the number to over 30, with mechanisms already put in place to have a nutrition officer in every Primary Health Facility by 2023”.

The Partnership for Improving Nigeria Nutrition Systems (PINNS) is a project designed to strengthen the Nigeria nutrition systems to be more Result-driven, Effective, Serviceable, Efficient and Transparent (RESET). The three-year project, which was implemented between April 2018 and September 2021, was implemented at the National level and in five focal states- Lagos, Kano, Nasarawa, Niger and Kaduna.

Prior to the PINNS project, the government of Nigeria was yet to finalize and approve the National Multi-Sectoral Plan of Action for Nutrition. Amongst policy and decision makers, there was low understanding and political commitment to improving the nutrition situation as some of them lacked clarity on roles, responsibilities and expectations.

In most cases, the nutrition line ministries, departments and agencies, charged with the coordination and implementation of nutrition activities did not have the funds for such activities. For instance, in Lagos state, there were no budget lines for nutrition in nutrition line MDAs.

Successfully advocated for Increased funding for nutrition across project states:

Increased Capacity of CS-SUNN Member Organizations: CS-SUNN supported increased capacity of its members at the subnational levels, media organizations, state actors in leadership by training a total of 100 CSOs to track and report budget allocation and utilization on a quarterly basis.

CS-SUNN Online School: The alliance developed and digitized CS-SUNN Advocacy and Leadership Manual (CALM) to sustainably build the capacity of alliance members and interested non-alliance members on effective nutrition advocacy at no cost! So far, over 200 students have enrolled in our online school and majority are certified for successful completion of the course. Enroll for the course here: https://cs-sunn-school.thinkific.com/

Promotional Videos on Exclusive Breastfeeding: Increased awareness and education of key stakeholders, gate keepers, policy makers on the importance of EBF and a call to action to create enabling environment for improving EBF in video format disseminated via our various online platforms and national network.