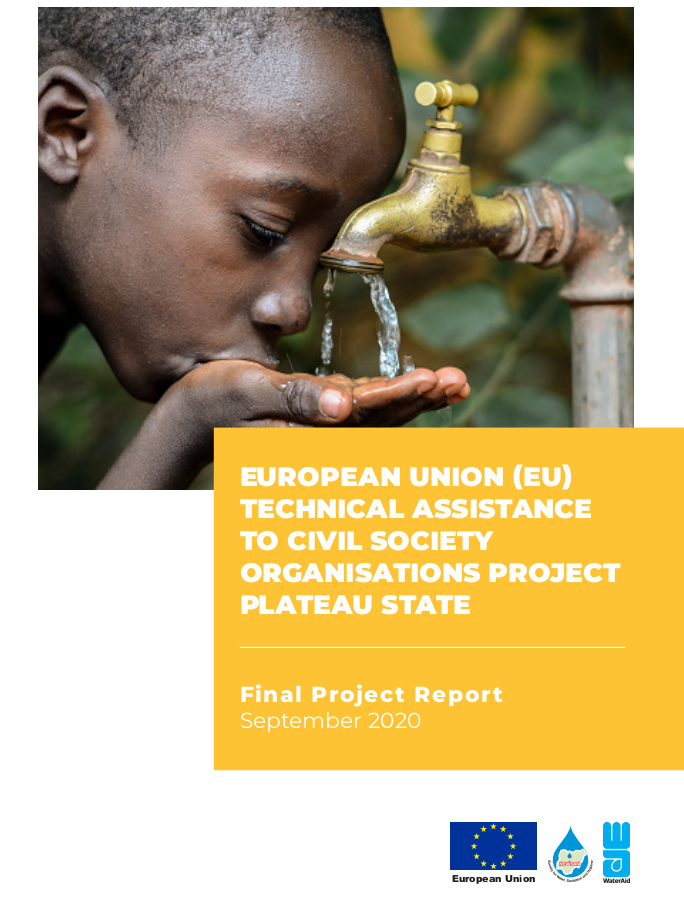 WaterAid Nigeria has disclosed that the capacities of more than 25 civil society organisations (CSOs) have now been strengthened to drive water, sanitation and water governance in Plateau State, under the European Union-funded Technical Assistance to CSOs (EU-TAC) project, implemented by the Society for Water and Sanitation (NEWSAN), with technical support from the organization.

The EU-TAC project which is now coming to a close, according to WaterAid Report was launched in 2018 to execute the Water Supply and Sanitation Sector Reform Programme III (WSSSRP III) in Plateau State, in a bid to improve governance of the sector and provide improved services in urban and small towns of the state. The project is part of the overall European Union support of over EUR 260 million to reach more than 10 million people with improved access to clean water, sanitation and hygiene facilities in 14 states of Nigeria.

Speaking at the occasion to mark the end of the, the Head of the EU Delegation to Nigeria and ECOWAS, Ambassador Ketil Karlsen, stated that “Water and sanitation services underpin our societies and can cause serious social and economic challenges when poorly managed and underfunded. Ensuring that people have access to safe, secure and affordable water is vital to ensure a decent life for all. Nigeria has to increase and sustained its funding to this sector to ensure that all access to water and toilets is a right of all Nigerians.”

The project had the specific objective of improving the capacity of civil societies in the state, and in Riyom and Shendam local government areas, to advocate for better governance in the water and sanitation sector and to act as a potential driver for good governance in the broader context of the public sector service delivery.

With the completion of the EU-TAC project in the state, the 25 CSOs are now better positioned to support all citizens, including women and people with disabilities, to demand their rights to clean water and safe sanitation, and to ensure that citizens are heard in decision-making platforms within the sector.

Also speaking, the Country Director of WaterAid Nigeria, Evelyn Mere, noted that the EU-TAC project has delivered on its objectives.

According to her “Over 25 CSOs have been strengthened to drive improved WASH governance in Plateau State for better health, gender, livelihoods and socio-economic outcomes. Additionally, community structures in Riyom and Shendam local government have had their capacities strenghtened and are already demanding for improved WASH services from the government while advocating for accountability in budget implementation process.

“We are most delighted to be part of the process and we appreciate the European Union for the opportunity. We also commend the Plateau State Government for their support and ownership of this project. However, it is important to note that the journey to improving access to water and sanitation has not ended. Indeed, it has only just begun”, Mere added.

The benefiting CSOs were also extensively trained in budget advocacy/policy analysis, human rights-based approach to water and sanitation governance, fundraising, gender mainstreaming, case study gathering and project monitoring and evaluation, which enhanced their capacity to engage the WASH institutions in the state. A notable achievement of their engagements with the state government was the development of the State Water Sector Bill, passed into law, following high-level advocacy engagements by the CSOs.

Engagements with the CSOs also led to the implementation of the Plateau State Water and Sanitation Policy and a Gender Audit in the Ministry of Water Resources, followed by the development of an action plan for gender mainstreaming in the ministry and its agencies. Continued engagements have also led to the prioritisation of water and sanitation by duty bearers; with budgetary allocations to water, sanitation and hygiene sector increasing from N4.9 billion naira in 2019 to N15.57 billion in 2020.

To ensure sustainability of the gains of the EU-TAC project, the CSOs will continue to advocate for the prioritisation of WASH services at both state and local government levels. They will also follow up with the Ministry of Water Resources and Energy to ensure the implementation of the Gender Action Plan.