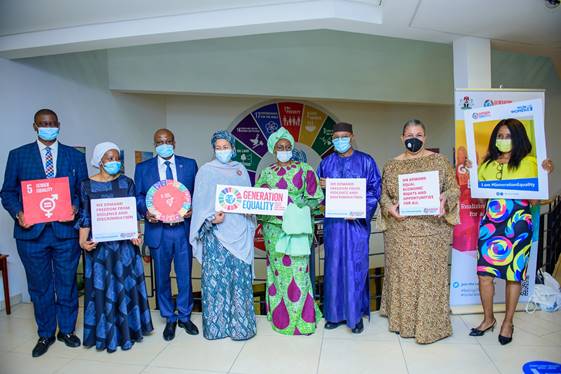 According to UN Women Representative to Nigeria and ECOWAS, Ms. Comfort Lamptey at the launching of the campaign: “The Generation Equality campaign is rooted in a journey that began 25 years ago in Beijing, China when 189 countries gathered to adopt what is considered the most ambitious blueprint for women’s empowerment and gender equality to date – the Beijing Declaration and Platform for Action, with its 12 critical areas of concern. Today, 25 years later we have a chance to take stock of progress and also to chart a new path forward. It is in doing so that we launch the Generation Equality campaign.”

The campaign demands equal pay, equal sharing of unpaid care and domestic work, an end to sexual harassment and all forms of violence against women and girls, health-care services that respond to their needs, and their equal participation in political life and decision-making in all areas of life. It seeks to raise awareness about the Agenda of the Beijing Platform for Action and foster inter-generational exchange and dialogue to empower a new generation of women’s rights activists.

“Generation Equality is about older and younger generations learning from each other but critically it is for us, the older generation to hand the baton over to the young people to carry on our mutual vision for a more prosperous and gender equal Nigeria”, said Deputy Secretary-General, Amina J. Mohammed.

The official Generation Equality campaign in Nigeria track song and video – No Woman, No Naija were unveiled during the event. Produced by veteran musician and producer, Cobhams Asuquo, the Generation Equality song and video features the voices of vibrant Nigerian female artistes including Di’ja, Waje, Omawumi and Adesua Etomi-Wellington. The artists are using their platform to drive home the importance of prioritizing the rights of Nigerian women and girls for an equal future. “I wish to acknowledge and thank the artists and producers behind the No Woman, No Naija track for using your platform not only for entertainment but to spread a message of truth and hope”, said Ms. Mohammed.

“The year 2020 is a significant year for all who believe in women’s empowerment and gender equality, as well as better days for the girl child. This informed my tagging of the year as the Call for Action for Nigerian women and children, earlier this year. This year provides us all with an occasion to reflect and map several other historic moments in the calendar of the advancement of women’s rights”, said Dame Tallen.

Mentorship, intergenerational dialogue and exchange are critical components of the Generation Equality campaign. Going forward, the campaign will also focus on strengthening the leadership capacity of young women, as well as supporting them to elaborate a forward-looking agenda for building a more gender-equal Nigeria and world at large.

We hope that this campaign will set the momentum for more young women and men to take centre stage that realizing women’s rights means putting women front and center to achieve gender equality. The global Generation Equality campaign will culminate in a Forum for women leaders and rights activists from across the world, in Paris, in June 2021.