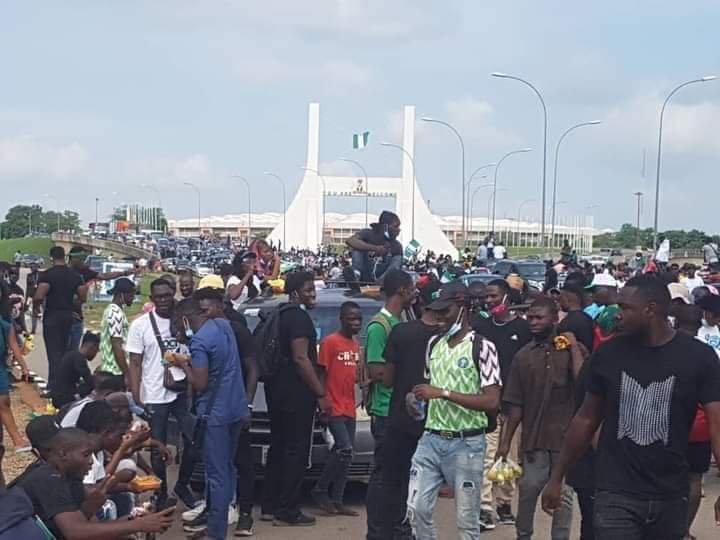 Amidst growing tension and chaos infiltrating the peaceful protest to bring an end to all forms of police brutalities and human rights violations by the Police Unit called SARS by unscrupulous elements, ActionAid Nigeria (AAN) has issued a statement calling on President Mohammadu Buhari to address the nation before it plunges into a state of Anarchy.

According to the statement signed and issued today by the Ene Obi, Country Director of the social justice organisation, “AAN has been following the unfolding events amidst the agitations by the citizens and has deemed it fit to further address emerging trends in the ongoing protest. The protest has moved from being a social media campaign to a peaceful protest by Nigerians across the globe in the last 13 days, with clear demands on the abolition of the Special Anti-Robbery Squad accused of unlawful arrests, torture, and extra-judicial killings.

“ActionAid Nigeria has observed that the peaceful protest is gaining more momentum across the country, with Young People airing their grievances on rights violations and the need for an overhaul of the country’s security and governance architecture.

The statement added that, the latest twist and turns in the ongoing protest, specifically the pockets of hijacks by unknown elements with unending attacks on peaceful protesters; the attack on the governor of Osun State; the loss of lives and property of protesters and innocent citizens; and most recently the prison break, and destruction of government properties in Edo State, the multitude of cars burnt in Apo, Abuja, calls for concern and swift action before the situation degenerates into full swing anarchy.

ActionAid Nigeria therefore calls on President Muhammadu Buhari, to fully address the nation in a national broadcast as a Father, Leader, and the President of Nigeria, with the mandate of the people to manage the affairs of the country and give clear-cut responses to the demands of the protesters before it is too late. Nigerians anticipate clear plans, timelines, and commitments, which will be in form of a pact with the citizens. The President of Nigeria, Muhammadu Buhari, should see this as an opportunity to write his name in the sands of time by starting the process of transforming this country especially by responding to the demands of citizens.

“ActionAid Nigeria also call on security agencies to keep securing the streets to get unscrupulous elements with illegitimate interests off the peaceful protests, while respecting the rights of peaceful protesters.

“We applaud the resolve of Nigerian youths leading the revival across the country and the resolute to hold government to account. However, it is pertinent that decorum is maintained while resisting any calculated attempts by unknown elements to disrupt, the just cause for total reformation of our country, Nigeria.” the statement said.