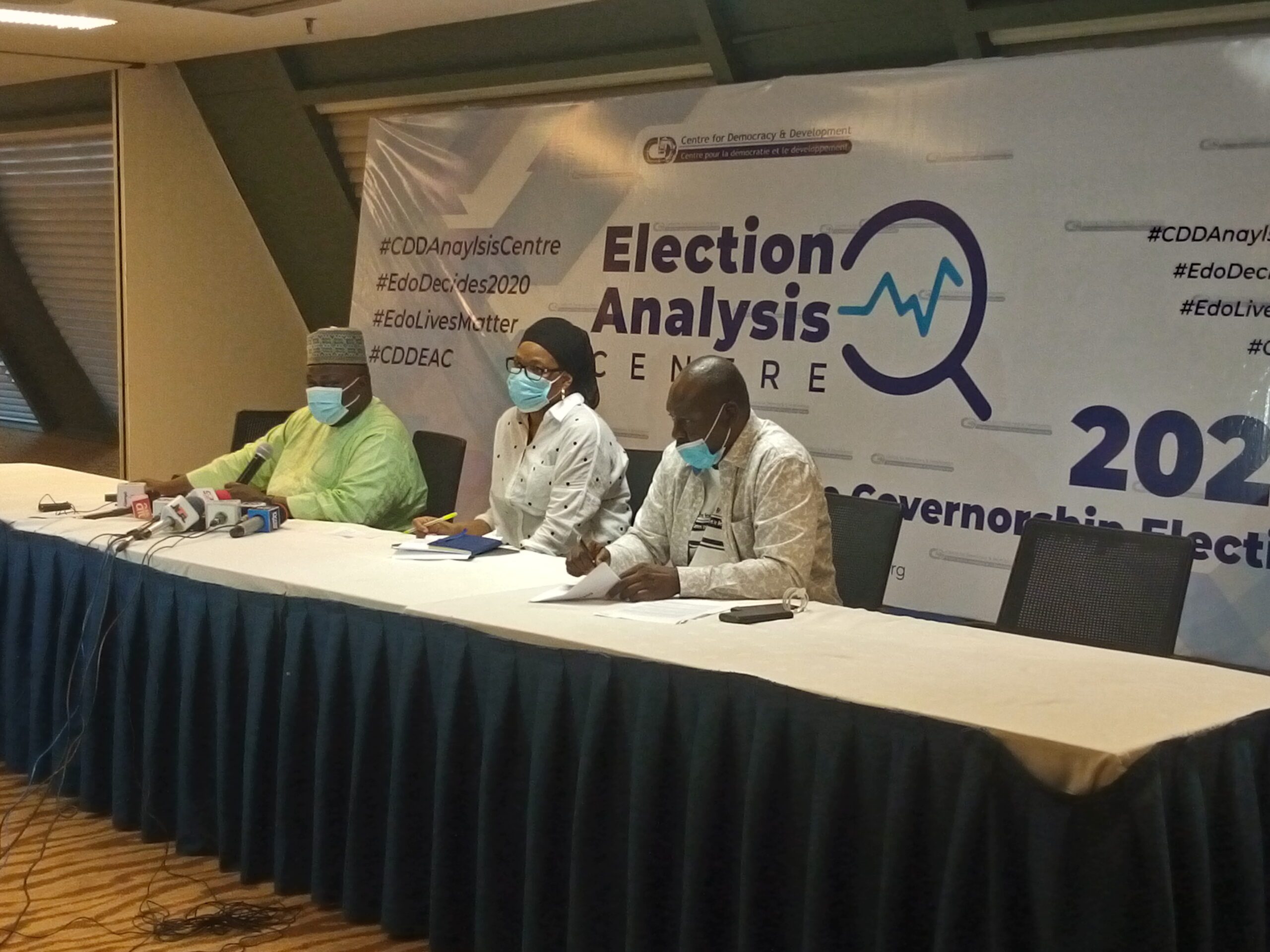 “In some cases, votes were traded for Ankara materials, and cash gifts from N1,000 to N15,000, Spaghetti and other food items,” – Hassan Idayat, ED, CDD

The Centre for Democracy and Development (CDD) on Saturday, September 19, 2020, condemned the high rate of vote-trading in the ongoing 2020 Edo Governorship Election.

The Director of the CDD, Idayat Hassan, while addressing journalists in Abuja during a press briefing on the release of the preliminary report on the election said it is quite worrisome that young girls were used for “indirect” vote-buying during the election.

Hassan said reports from CDD observers on the field show that politicians in an attempt to circumvent the electoral process used young girls as their contact with the voters for the trading.

Hassan said: “We saw largely vote-buying in the Edo election, the most worrisome trend in this election is the level of sophistication at which politicians engaged in the anomaly of vote-buying.”

“In some cases, votes were traded for Ankara materials, and cash gifts from N1,000 to N15,000, Spaghetti and other food items,” Hassan decried.

She said CDD is concerned that despite expending time and resources to deploy thousands of law enforcement officials for the election, nothing was done in the face of infractions such as vote-buying.

Speaking on adherence to the Coronavirus (COVID-19) guidelines and protocols by the Independent National Electoral Commission (INEC), Hassan said CDD observers reported a general non-compliance to key protocols for preventing further spread of the novel disease.

She said in a number of the exceptional cases where compliance was observed, it was limited mainly to the wearing of face masks and nothing more.

“The flouting of the rule of physical distancing was the order of the day, there was a complete inability of INEC to maintain her 2-meter rules as written in her guidelines,” CDD Director said.

She also said that it is important to note that the late arrival of the INEC staff also contributed to the non-compliance with the COVID 19 protocol as they (the officials) in an attempt to rush commencement forgo the processes.

“In the context of the serious risks posed by the COVID-19, CDD calls on INEC to explore further preventive measures by instructing poll officials involved in the conduct of the election to self-isolate, while working with the Nigeria Centre for Disease Control (NCDC) to test poll workers, who conducted this election,” she added.

According to Hassan, CDD observers report indicate that the late arrival of poll officials was caused by poor logistics, especially transportation of personnel and election materials to polling units.

“An example is the Registration Area Council located at the Physical Education Complex in Afuze, which did not have vehicles to move election officials and materials. Across the state, there were faulty card readers recorded, this slowed down polling in several polling units,” she added.

She said these logistics issues, especially with respect to the transportation of personnel and materials to polling units, and claims of non-payment of election workers, have been a recurring theme in the conduct of elections by INEC and should be tackled.

Professor Ibrahim said that in Ologbo, Ikhoba Okha LGA, one person was reported to have been shot while in Ihomwonde LGA, Ward 5 PU 1, 2, and 3, the voting process was reported not totally peaceful as conflicts erupted amongst party agents that resulted to disruption of the process.
Also, election materials were hijacked in Ward 9, Unit 15 of Egor LGA by political thugs who are hell-bent to subvert the electoral process.

“CDD observers also reported an incident of shooting in Orhionmwon Local Government Area. Party agents were also major drivers of violence in areas with incidents as the engaged in altercations, which later snowballed into fisticuffs,” Professor Ibrahim said.

He said CDD observers reported several cases of electoral offences in the course of the election. In polling Unit 03, Egureka Ward, Esan South East LGA an elderly man who attempted to vote with his son’s voter’s card was apprehended by the police.

In another instance, observers also reported that a man came to the polling unit with multiple ballot papers even as some party agents were observed assisting voters to thumbprint their ballot papers thereby violating the secrecy of the vote.

On the use of disinformation as a tool manipulate the outcome of the electoral process, Professor Ibrahim said it has become difficult to ascertain the actual realities on the ground because many false narratives been shared on various platforms.

“CDD observers also documented many instances of fake news being deliberately spread to undermine the truth of what is on the ground in the electoral process,” he said.
Further speaking, Professor Ibrahim warned: “An election is not a market. It is a criminal offence that should be punished by the authorities.”

In his remarks, the Executive Director of the Civil Society Legislative Advocacy Centre (CISLAC), Awual Ibrahim Rafsanjani, it is important that Nigeria needs to find a lasting solution to her electoral challenges.
According to Rafsanjani, it is until these challenges are addressed, the electoral reform so desired may not be near.