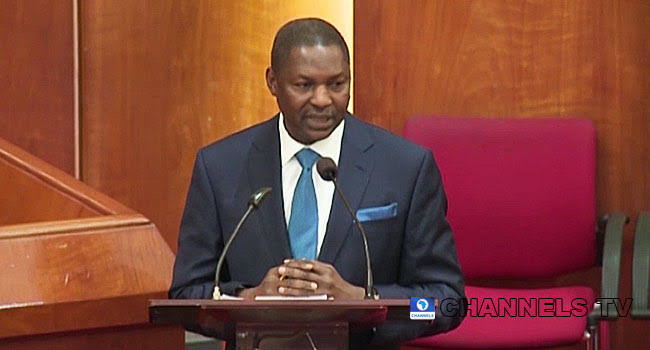 A leaked document and email from one Olanrewanju Suraju who claimed to be the Chairman of a Civil Society Against Corruption indicates a desperate move to cast aspersions against the Honourable Attorney General of the Federation and Minister of Justice, Abubakar Malami, SAN.

The Chairman of Integrity Group Against Corruption, Mr Bello Gambo Iliya showed the leaked email to reporters in Kano on Tuesday.

The leaked email titled “Complaint Against Malami” was dated Monday 27th July 2020 and signed by one Lanre. The email was intended to garner support from civil society organisations.

The letter reads” Dear Colleagues, Iam checking to know if you and your organisation will be interested in jointly signing this document and any other Comrades you know. Please kindly revert ASAP

The writer of the email (Lanre) was demanding support to petition President Muhammadu Buhari against the Attorney-General of the Federation and Minister of Justice Abubakar Malami, SAN.

It could be recalled that Olaruwanju Surajo, claimed to be the Chair of Human and Environment Development Agenda in 2018 when he addressed a press conference on relevant matter and now he chairs Anti-corruption NGO.

Recall that for days, it appears their efforts to get people to own the document failed as he resorted to emailing some NGOs to achieve their sinister  motive.

It was clearly verified that the said man was busy struggling to get support from civil society organisations against the Attorney General of the Federation and Minister of Justice.

Mr Bello, therefore, appealed to Malami to remain resolute in the fight against corruption, adding that “peoples like Lanre are survivalists trying to revive themselves through sponsorship against authorities fighting corruption in the country”.