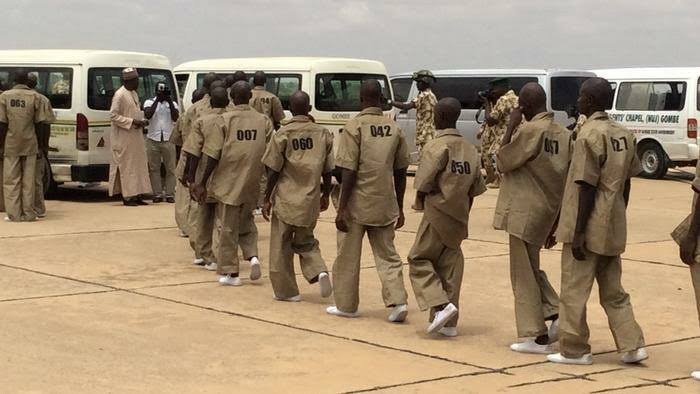 The Nigeria Government has grappled under the General M. Buhari Administration for the last five years retrogressively up until today with the war on Boko Haram terrorists.

The signs litter the entire North East of Nigeria which is near desolate and still a raging ground zero war theatre that had birthed the displacement of several thousands who now live in IDP camps.

In a ResearchGate thesis published on “Violent Radicalisation” the progression from pre-radicalisation to deradicalisation by Jason-Leigh Striegher so much is brought to the fore of this ideology driven phenomenon.

The Nigeria Military’s development and implementation of deradicalisation programs with respect to the Boko Haram insurgency can be termed by experts and even global community as nothing short of dysfunctional.

The Boko Haram insurgency has pointers of government collusion and a Northern political elitist footprint in cahoots with Western powers, rather unfortunately the results of such programs have not yielded holistic results expected.

Saudi Arabia, Indonesia and Yemen are three nations whose deradicalisation pograms have been selected for discussion in the Jason-Leigh Striegher thesis due to the diversity of the programs implemented in these particularly Islamic states.

Nigeria is not an Islamic State but rather secular, but then it is enburdened with over a decade long Boko Haram terrorists threat to Islamise its geographical space and people. The contents of the thesis unveils a study that focuses on the clear distinction between disengagement and deradicalisation; as also pinpointing and documentarily capturing what effects lead to the push and pull factors that potentially have can extricate identified terrorists from violent extremism.

The thesis highlights Jack Roche as an example of someone that in general deradicalised himself as a result of “push and pull factors”. It is noteworthy to state that given that the development of terrorism is a product of its own time and place, it therefore must follow that in such a situation, the issues of disengagement and all that this pertinent subject matter ellucidates will also be context-specific and necessarily nuanced based on the terms of how the programmes are constructed, implemented, and promoted.

There also seems to be a total lack of partnership and much needed collaboration with global institutions as the UN or AU related agencies or even independent think-tanks who specialise in this field which have in-depth capacity, specialty and expertise to carryout and deploy necessary support systems that enhance the entire spectrum of violent deradicalisation programs.

The potent need to treat psychological illnesses of all kinds that may have developed from the exposure to the terrorism phenomenon and war theatre engagements for the individual subjects (POWs) of the program who maybe suffering varying measures of PTSD (Post Traumatic Stress Disorder) and other psychosis is key to the methodology of deradicalisation.

And all these seem to be the missing links in the programs being implemented by the Federal Government of Nigeria and the Nigeria Military. Every nation’s peculiarity and national ideology, as well as the expertise of the handlers play an epicentric role in how, why and what forms of deradicalisation programs will give longterm results that discourage violent recidivism once the subject or subjects are release into society. There needs to be a special psychological quarantine of these individuals for the greater good until it is proven beyond doubt that they are fit for societal reintegration. More References on the topic here

Following from the above the answers are: